Shielded cables are ubiquitous across nearly all industries. Not to be confused with armored shielding, which is designed to physically protect a cable, shielded cables are used to safeguard against electromagnetic energy and the negative consequences from signal corruption, blown components, or even a failed qualification test. Cable designers will specify whether a shield is required and its general construction. But just adding a shield to a cable may not be enough to achieve the required performance levels that are anticipated.

For a particular design application, design engineers will mull through numerous shielding arrangements to achieve the desired performance of the cable. This is important because shielding adds cost, complexity, and can also change the flexibility and minimum bend radius of a cable. Designers will define the shielding material type, the overall coverage, and if individual legs of the cable must be shielded within the bundle.

Some projects demand that groups of conductors are individually shielded from one another, helping reduce the likelihood of cross talk within the cable. Acting like a faraday cage, the shield is typically connected to a ground pin or terminal ring which is eventually tied to earth or chassis ground. Some cables are built with a floating shield, which has no direct electrical connection to ground. In these applications the shield layer just covers the length of the cable and is cut or trimmed adjacent to the cable’s end. While in theory one would electrically tie the shield to ground, some cables don’t always need this to function and actually work better with this floating ground.

Everything is relative, according to Albert Einstein. This remains a favorite and wildly true concept while also applying to cable design theory. Shielding performance is relative. This includes both the levels of signal attenuation attained and the ground plane voltage that is common with the shield. How much shielding attenuation is required? How is the shield ground referenced to other system or chassis grounds? Is this shielded cable completely contained within another assembly or enclosure? As system complexities increase, these nuances matter and can have significant design implications later in the program. 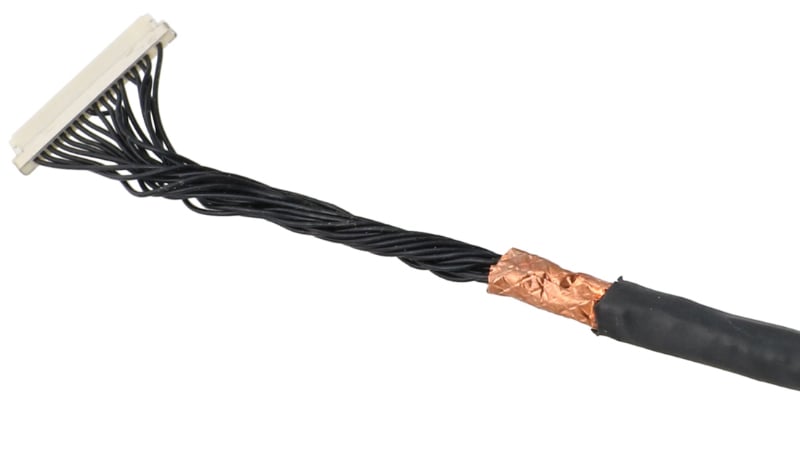 Example of a cable assembly with floating shield.

There are two primary types of shielding: foil and braided. Foil shielding is the most common and refers to a cable where the shield is made from metalized layers of film. This can be actual foil or an inexpensive flexible film with a conductive coating. Thin layers of aluminum, copper, or metalized polyester can be wrapped around the cable in varying techniques achieving the desired shielding configuration. If differential pairs of signal lines need to be individually shielded, using a metalized foil is the best way to accomplish this. An outer jacket can then be placed over these shielded conductors to complete the bundle. 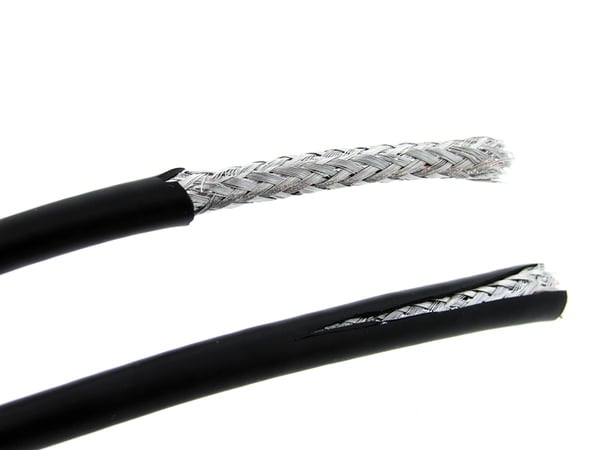 Braided shielding in a cable assembly.

Braided shielding is comprised of wrapped thin wires tightly woven in a sleeve. Usually made of tin or copper strands, this type of shielding normally requires specialty machinery to wrap the strands around the cable bundle. As they are intertwined together, bare of insulation, the fine strands become a faraday cage covering up to 95% of the cable. Because of the braiding pattern itself, achieving 100% cable coverage is nearly impossible.

A braid’s performance is usually more than sufficient in terms of signal attenuation over a wide range of frequency bandwidths. Mechanical flexibility, high frequency signal, and the number of conductors that require shielding are the biggest factors when deciding between a foil shield, braided shield, or even a combination of two.

Engineers perform several tests to characterize the shielding performance of a cable. This allows for meaningful data to be gathered on different shielding conditions in a controlled setting. Predicting the behavior of electromagnetic energy and the ways it couples within systems remains a highly complicated subject. But simple tests can be performed to verify design configurations early in development and give confidence to engineers as the project matures.

Third-party labs perform several types of RF, EMI, and EMC tests that help determine the performance of a cable’s shield. Industry specifications such as Mil-STD-461 and RCTA-DO 160 define several of these tests that must be passed to comply with the required performance standards. As the name implies, shielding effectiveness is a test that is completed to quantify a cable’s shielding performance against a known baseline. Radiated emissions testing is one of the most critical and often failed tests because it is difficult to predict the behavior of RF waves within complex systems. Radiated susceptibility and conducted emissions tests are also important and are required as a part of most mil-aero qualification programs. 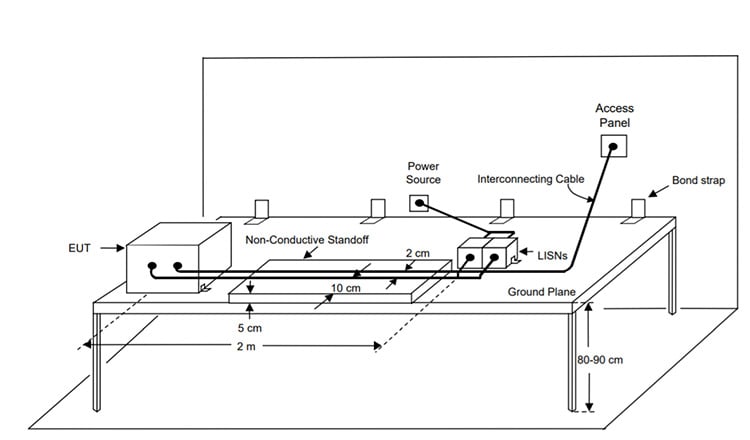 Mil-STD-461 establishes the requirements for the mitigation of electromagnetic interference (EMI) for products supporting the Department of Defense (DoD). These tests and setups are intended for electromechanical enclosures that are no larger than an equipment rack, and for the wiring harnesses between said enclosures. Engineers may fabricate several test cables to that can be built with varying shielding configurations to check for changes in system performance. Testing is performed per the setup above. Development testing can be considered outside the official standards to help select the best design configurations.

The need for cable shielding is widely established and seldom scrutinized. But what is the relationship between EMI performance and the shield type? Does this change if the shield is electrically tied to ground? For whatever extenuating circumstance what happens if the shield cannot be tied to chassis ground, or any ground at all?

In some projects a floating shield still offers sufficient signal attenuation allowing Engineers to pass Mil-STD-461 and RCTA-DO 160, and in others a floating shield is necessary just to for the system to operate. It is important to have options come test day to isolate or reconnect your cable’s shield to aid in troubleshooting and gather meaningful data.

On paper, engineers will design electrical schematics from established theories and ideal electrical principals. Considering the amount of time available in the early phases of complex military and aerospace projects, it’s easy to focus on designing a flawless cable. This can become a major program risk if the cable is not manufacturable, if the cable is too expensive, or if the cable will not fit where it’s needed. Furthermore, custom cable extrusions with complex shielding arrangements can carry a 5,000-foot or more minimum order quantity. And what happens if the shielding configuration even does not work?

Floating shields in cable assemblies can still function if they are not electrically tied to ground, but testing is required to make certain. For reasons like this, it’s important to engage a full-service manufacturing partner like Epec that can help design, manufacture, and test the completed shielded cable.