In this blog post you can view two videos that go into detail about the functionality of the human-machine interface (HMI) product sample and an overview of how capacitive touch membrane switches work. The transcription of both videos is also provided below. Take note that the transcriptions have been edited for better readability. 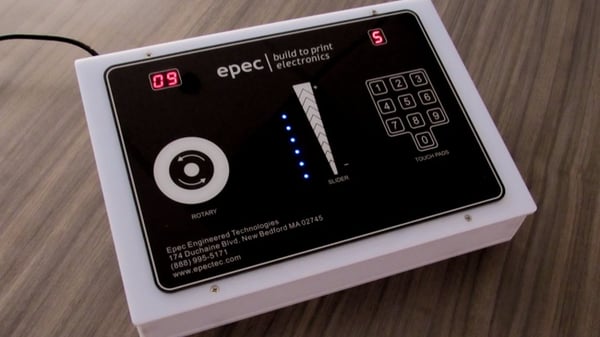 Today, I'd like to show you some of our capacitive touch samples. When we’re traveling out in the field, working with customers, some of the most common questions are: how do these samples work? What's the sensitivity like? How do the LEDs illuminate and support backlighting operations?

When we're travelling with the sales team, we have these non-energized samples. These are great for show-and-tell but what they lack is the ability to activate a switch, turn LEDs on and off, illuminate the display, and many other questions that the customers ask that we just can't answer without a full test setup.

Now, each one of these switches is designed to make an audible beep with each key register and illuminate LEDs depending on the operation from the user.

The goal of this product is to help educate our customers on how capacitive touch switches work and most importantly, the relationship between your finger being applied to the surface and the switch registry.

The way we developed this product was three separate and discrete switch systems, the first being a rotary switch, the second being a linear slider, and the third demonstrating a keypad-type capability. Each one of these switches is energized by our USB cable.

We took four conductors, blanked out two of the pins so we're using the plus and minus of the USB cable to energize the system. That one cable power powers all three of these switches. Each of these switches uses its own individual microcontroller that has embedded firmware that helps interrogate the capacitive touch switch and creates some switch command based on how your finger is pressed.

Behind the back panel you have three individual microcontrollers that all are constantly interrogating the capacitive touch sensor. When they register your finger by coming in contact with the surface, depending on the duration of that touch and the amount of area that your finger that presses, it registers a command.

On the keypad when you press the switch, it triggers a certain number to be shown on the display. With the linear slider, it illuminates certain number of LEDs based on the position of your finger. Lastly, the rotary switch, you're able to rotate around the perimeter of the circle, registering whatever switch position you're at.

Our focus is on the design and integration touch technology, into a high reliability, feature-rich user-interface. We can incorporate everything from micro-processors, embedded controllers, LED, LCD, or VFD displays, and backlighting options to include: discrete LEDs, EL, light panels, or fiber-optic.