For many narrow to wide bandwidth band pass applications, pure band pass filters (also bandpass filters or BPF) are a good fit, - forming rejection bands below and above the passband in a single filter. Coupled line, combline, and interdigital are three pure band pass filter types. Pure filters can be the most efficient solutions for loss and physical footprint where the specs mandate their usage. For ultra-wideband applications, pure solutions may require too many poles making physical size too large and insertion loss too high for many systems.

Additionally, the resonance of a band pass will be closer to the passband the broader the passband gets, limiting isolation bandwidth. For some topologies, very wide bandwidths are not even possible to achieve. For ultra wideband applications, it is often necessary to split the band pass filter into separate high pass and low pass filters so that the upper and lower edges can be defined separately, and filter size and insertion loss can come down and resonances can be kept a reasonable distance outside of the upper band edge. For the purpose of experimentation, the following filter specification was created as a benchmark to design against. 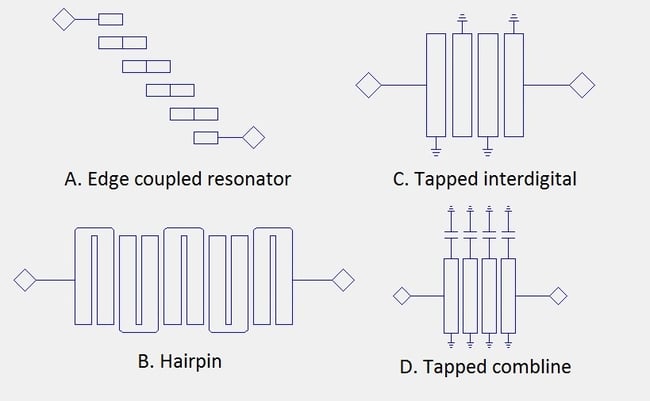 First, an edge coupled BPF with the same number of total poles as the HP/LP solution, below, was modeled. The results in Figure 2 show the broadest bandwidth possible for the topology, about 67%, while the goal spec for this experiment is 112%. 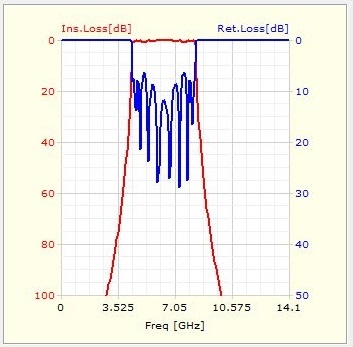 This eliminates this topology as a potential solution. Figure 3 shows the response of a tapped interdigital topology. This toplogy can meet the bandwidth, but reresonates immediately. Since the goal spec is -50dB rejection out to 18GHz, this topology will not be useful for the solution without adding a series cleanup low pass filter to it, growing the package size and insertion loss of the device. 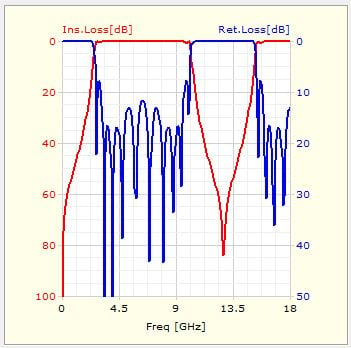 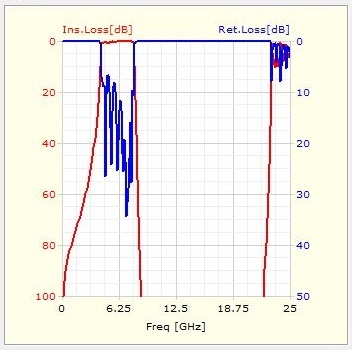 The high pass edge was designed to meet 1.5dB insertion loss above 2.5GHz and 50dB of isolation below 1.5GHz, with no re-entry mode below 18GHz. A suspended substrate topology was used for lower loss in the mostly air dielectric and large series capacitors using coupling between the two layers on the suspended core. It is a 4 Pole filter and is plotted in Figure 5. 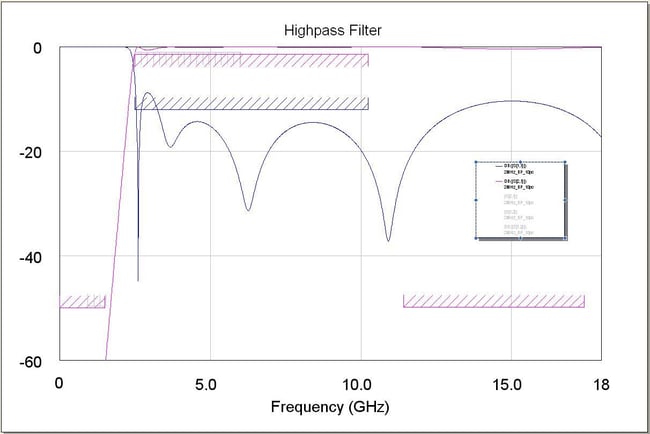 The low pass edge was designed to meet 1.5dB of insertion loss below 10.25GHz and to have rejection of 50dB above 11.5GHz, with rejection extending out to 18dB. The low pass uses open stub resonators, which are chosen for more tunability. It will be printed on the same PCB core as the high pass filter, although it only uses one layer. The modeled response is shown in Figure 6. 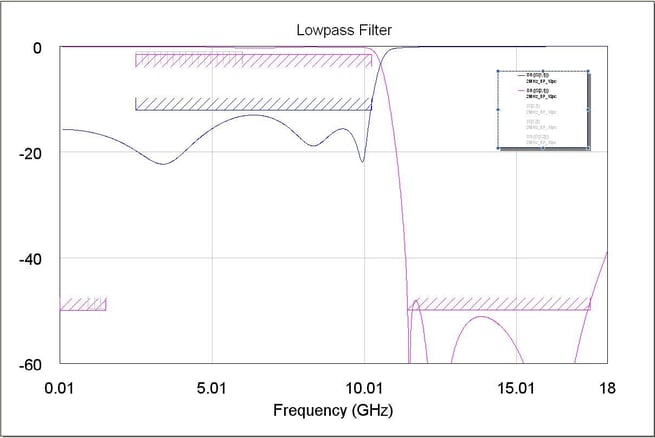 The low pass and high pass sections above were simply stitched together in series to create the 112% bandwidth band pass filter from the goal. Minimum tuning at the junction was the only change. The resulting filter response in Figure 7 very nearly meets spec across the goal and likely would meet spec with some minimum VSWR tuning. 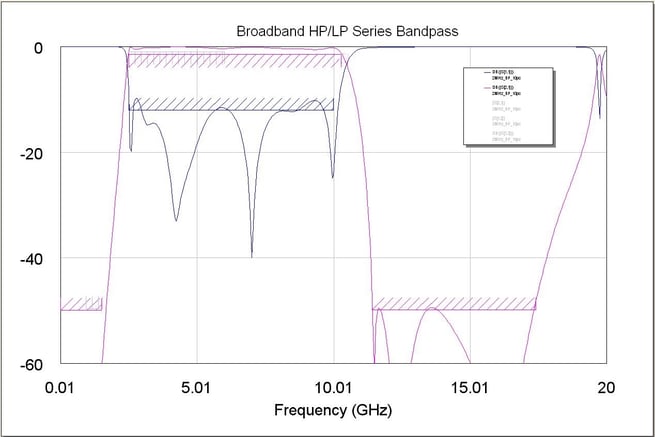 Combining low pass and high pass filters in series is one way to get very broad bandwidth on a band pass filter while maintaining broad rejection bandwidth. The full specification should be weighed against the various available band pass topologies to determine which to use. If the spec is very broad band with broadband rejection as well, the high pass/low pass series band pass may be the best option.  Combinations of these cascading high pass/low pass sections work very well in diplexers and multiplexers as well. Or, one could use a high pass filter with cutoff above the low pass filter, connect them in parallel with two T-junctions, and create a broadband notch. There are many potential applications for this topology.