A pure notch or band stop filter (also called band reject filter) works by creating a Voltage Standing Wave Ratio (VSWR) resonance over a narrow bandwidth. This creates near total reflection over that bandwidth, while having very little reflection in the surrounding pass bands. By the nature of their creation, these notch filters are typically narrow band. Bandwidth comes linearly with added resonators, increasing size and loss.

An alternative approach to band stop creation is to separately design a pair of high pass and low pass filters with overlapping rejection bands in the stop band of interest. These two filters can then be connected in parallel with a pair of Tee-junction elements.

Tee-junctions are a kind of power divider/combiner used in diplexers and multiplexers to separate the electrical paths of the different pass bands. The combined response is a summation of the high pass and low pass filter responses and results in a band stop filter that can be tuned in frequency at either -3dB passband point with little impact on the other passband. This filter can also be tuned for bandwidth without the addition of more poles to the high pass and low pass filter components.

A moderate specification was chosen as a stop filter in order to demonstrate the high pass/low pass parallel method. This specification is shown in the table below.

A five section high pass filter was designed and tuned in Microwave Office to approximate the upper half of the band stop spec. The filter was simulated and tuned as an air dielectric stripline with broadside coupling capacitance at the input and output and between the two shorted stub resonators. The insertion loss of the tuned high pass filter with limit lines for the band stop specs is shown below in Figure 1. 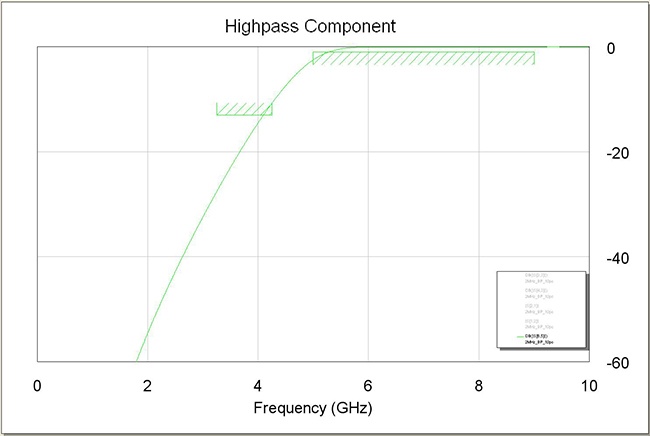 Like the high pass end, a five section low pass filter was designed in air dielectric stripline with two open-circuit stub resonators separated by three matched transmission line sections. The low pass filter response is shown in Figure 2, along with the lower half of the band stop spec. 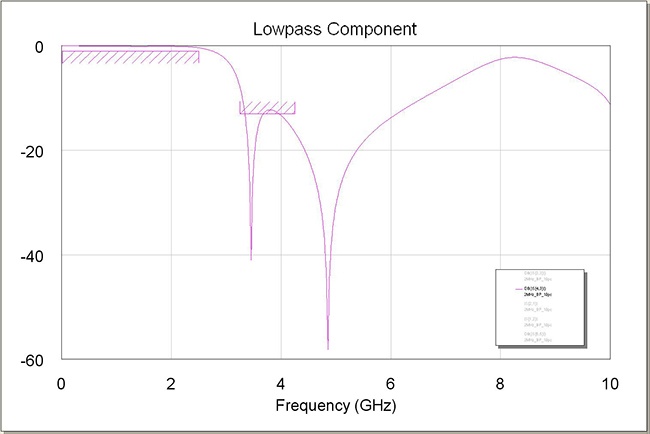 The high pass and low pass components were connected in parallel by using tee-junctions on both sides of the filters. A tee-junction is a type of divider/combiner typically used in diplexers and multiplexers as a junction between the low pass and high pass arms. The resulting circuit required impedance tuning on both filters as well as an area near the tee-junction to achieve the high reflection stop band.  Figure 3 shows the simulated insertion loss plot vs. the original band stop filter specs. 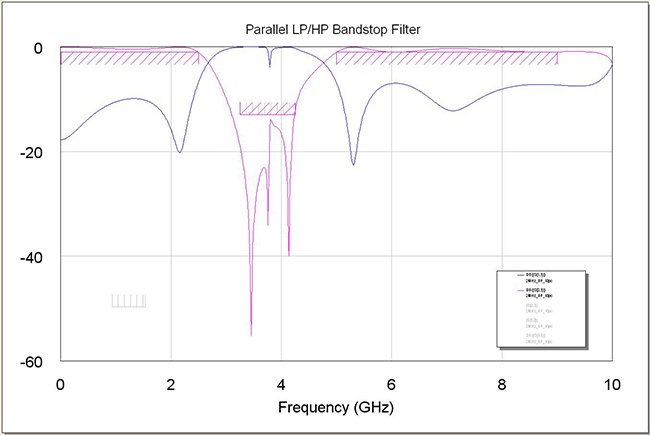 Tuning the LPF Over Frequency

The new low pass was simply scaled linearly with respect to starting and target cutoff frequencies. Resonator lengths and transmission line lengths were scaled by a factor of 1.2:1 and retuned, while the transmission line and resonator widths were not changed as the same characteristic impedance was desired. The resulting high pass filter response is shown in Figure 4. 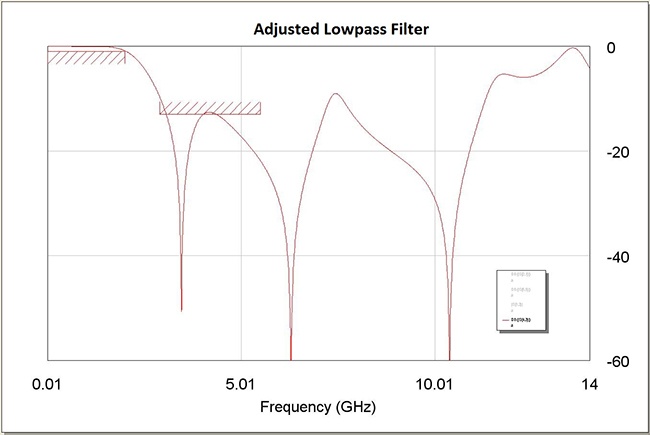 This filter was then stitched back into the bandstop filter as above, with some minor tuning for the high reflection stop band. The response of this new filter is shown in Figure 5. 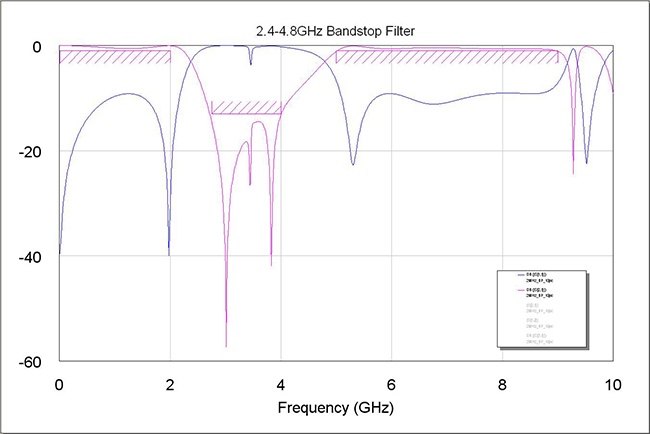 Tuning the HPF over Frequency

Just with the low pass filter above, the high pass filter can also be tuned over frequency to change the center band stop frequency and the band stop bandwidth. To demonstrate this, a new spec was created with the same low-end specs as the second broader bandstop above and a higher high pass cutoff frequency, resulting in an even broader stop band. This spec is shown in the table below.

The high pass filter was tuned similarly to the low pass, scaling the shorted stub resonators by a factor of 0.75:1, as well as the lengths of the couplers connecting them. The couplers had to be further tuned to compensate for the reduced coupling values of shortening their lengths. The resulting high pass filter response is shown in Figure 6. 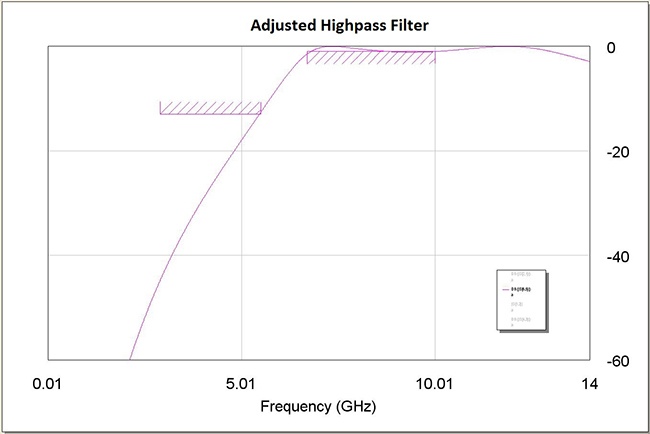 The new high pass filter was then added back to the band stop model to create a band stop that is wider band both at the high pass and low pass ends than the original. The resulting model was tuned and the response is shown in Figure 7. 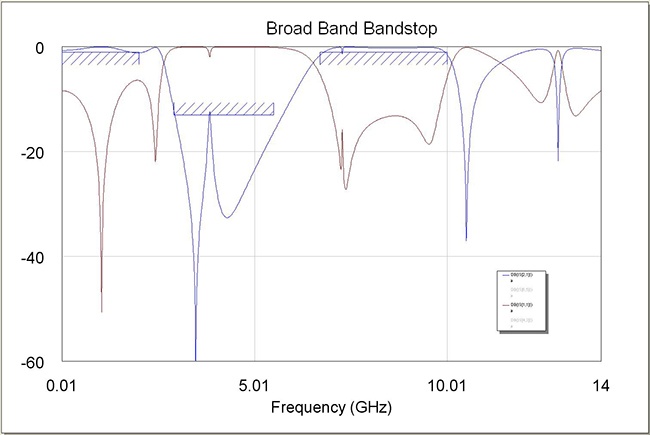 For challenging band stop applications, specifically those with a broad stopband or those that may require tuning in frequency of one band edge without much impact on the other, a parallel implementation of separate high pass and low pass filters may be a good solution. This solution allows the band stop edges to be implemented and tuned independently before being joined in parallel.  Another benefit of the implementation is that broad band bandstop can be achieved without adding a loss and space-prohibitive number of resonators to the design.