When designing and manufacturing passive broadband high frequency cascaded LC filters (inductor and capacitor), a lot of undesirable component interactions can occur if not properly managed. The goal is to minimize the difference between an RF microwave filter design constructed with ideal components and one using commercial off-the-shelf (COTS) and custom manufactured components.

Limitations of these components are frequency dependent but various techniques can be employed to improve their performance and reduce their impact on the microwave filter's overall electrical response.

The two essential components found on every LC filter circuitry are inductors (L) and capacitors (C). Unwanted distributed electromagnetic coupling can occur between these components but various techniques can be used to reduce these unwanted effects and minimize the deviation from a filter's ideal performance. Above all else, the choices made impact frequency of operation, power handling capability, and temperature stability.

The lumped element component values realized using software analysis is considered to be ideal. In reality, these components occupy three-dimensional space. A consequence of components co-located in this space is reactive coupling with other components. The key problem for capacitors is the distributed inductance of the components exposed contacts.


Inductors contend with distributed capacitance between turns tend to be sensitive to their installed environment because of their physical size. These characteristics can cause magnetic and electric coupling to their surrounding components. Additionally, unwanted losses can be influenced by the volume of solder used to connect the components to the circuitry. 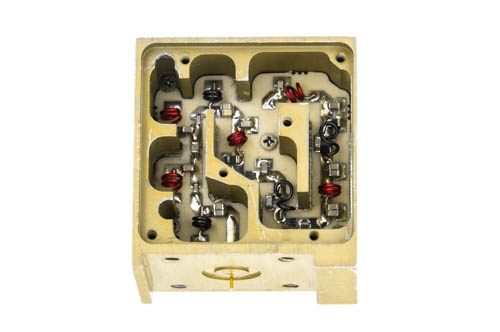 Example of RF Filter with Capacitors in Parallel


The effects can be minimized by using similar capacitor values with similar self-resonant characteristics. The larger the difference between the two, the more effect it can have on loss and attenuation. Manufacturers supply components with the capacitance measured and marked on the case. This capacitance can be modified by the component's distributed inductance and most of this inductance is contained in the lead length of the circuit. These should be kept as short as possible to avoid an increase in the distributed inductance.

Unlike capacitors, which are off the shelf components, inductors are usually custom fabricated to print. Factors that influence the specification are size constraints dictated by the filter order and physical space available the filter can occupy, required inductance, power handling requirements, desired Quality Factor, and frequency of operation.

Inductors also differ from capacitors in that they are more affected by the location where they are installed. Their physical size increases the electric and magnetic coupling to the surrounding components. The distributed capacitance of an inductor, between the turns of the inductor and to the surrounding components, can change the inductance. A coil's distributed capacitance can be reduced by winding the coils with finer wire and slightly increasing the spacing between the turns. Properly designed air wound coils used in series with capacitors provide stable inductance over temperature and frequency. Choosing your wire diameter, insulation type, and mounting orientation are the three main criteria.

Copper is a very good conductor but printed circuit boards (PCBs) introduce signal losses that increase at higher frequencies. The calculated losses on a Microstrip PCB design, beyond the loss of the circuit itself, are a combination of conductor and dielectric losses. The resulting insertion loss can be improved through the use of silver plating over the bare copper. This plating also provides a superior surface for soldering of the components. Unfortunately, tin/lead solder introduces loss back to the circuit and therefore control regarding the amount of solder is extremely important. The correct amount must be applied to meet the IPC-Class requirement but must not be allowed to flow to the associated transmission lines.

Component placement and RF shielding within the enclosure are critical to effectively reduce the inherent coupling between capacitors and inductors. Complete mechanical shielding is generally achieved by isolating the components to be shielded in a fully enclosed cavity. 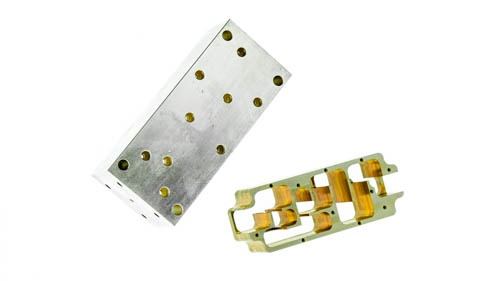 
This is not always possible in a compact design; therefore more than one method must be used. In conjunction with mechanical shielding, component placement can assist in reducing the effects of coupling. When inductors are co-located, the coils can be placed at right angles to each other. Another method is to keep the coils at least as far apart from one another as their outside diameter. Both methods must also be mindful of the lead placement as they relate to the capacitor location and possible distributed inductance.

One method to offset this is to reduce the line width or length of the printed circuit board trace but must be carefully done to avoid affecting impedance. The capacitor orientation can also be maximized by mounting the component in a vertical orientation rather than the traditional horizontal position. Mechanical shielding can be achieved by creating a network of machined pockets for each capacitor/inductor network. This can complicate the design but can also yield dramatic results if the proper materials are used and contiguous grounding is maintained.

Distributed inductance of the through path of a filter circuit causes a gradual increase of associated losses that can be minimized or eliminated with various design and construction techniques that isolate the component interference and parasitic resonances. The physical size of capacitors and air wound inductors makes them susceptible to internal and external capacitive coupling.