The V-score process is the addition of thin, double-sided cuts into printed circuit board (PCB) laminate for the purpose of assisting in the removal of individual parts from the array. The thin cuts which do not go all the way through the material, act as a perforation of the laminate so simple flexing of the laminate, or use of a cutting wheel, will aid in the removal of parts after the assembly process.

The V-score equipment consists of two blades (top and bottom) that run across the panel in a straight line while cutting. It is also possible the blades are stationary as the production panel is pulled across them among some of the older equipment.

Examples Of V-score Cuts That Are Jumped

Sometimes, the assembler needs the V-score to NOT go through the PCB rails, or waste rails, of an array. The reason for this is that the waste rail maintains rigidity of the array due to heavy components, or thin laminates. If the V-score is left as is, the parts could break away from the array before the assembly is completed.

To avoid this, the cutting blades have to be lifted off the laminate before reaching the end of the panel. This process is called jump scoring.

PCB jump scoring can be accomplished on a lot of the newer V-score equipment. You are essentially programming the blades to lift off the panel during the scoring process. Note that this action happens while the equipment is running, so you will always have a small amount of graduated V-score within the waste area. This is because if you started raising the blades before you reached the end of the parts (not the panel) the V-score depth in this area would not be deep enough.

This will lead to difficulty in separation of the assembled parts, as the graduated V-score depth will not be deep enough and the parts will fray and break. With the blades rising after passing the part edge, the waste area needs a minimum of .25” width to accommodate distance needed for the blades to clear the material and maintain enough material to keep the desired rigidity.

Identifying Jump Score on the Drawing

It is important that the requirement of jump V-score is communicated on the part drawing. Simply drawing V-score lines that go through the parts, but not through the rails, with no text referring to jump score, could lead to un-expected results. Occasionally, when the array is designed after the parts, the V-score is not placed in the rails in error, and the parts will be jump scored when they shouldn’t. In addition, if jump score is not called out on the drawing, the intended jump score will be missed and the V-score will be all the way through the panel when it shouldn’t.

The photos below show how the jump score should be called out on a drawing and also is an example of a drawing that had no jump score call out but the drawn score lines seem to designate otherwise. A simple call out on the drawing will lead to parts being built as expected.

Example Of Jump Score Without Callout 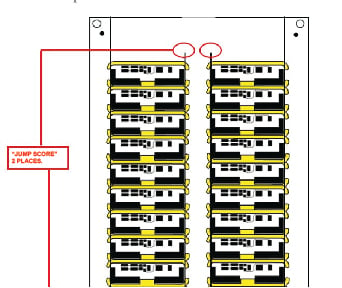 Example Of Jump Score With Callout

With the trend of increasing numbers of PCB surface components, the necessity of jump scoring and panel rigidity will gain popularity amongst board designs. Insuring that this requirement is communicated properly on drawings and data will save headaches at assembly from non-conforming score requirements.