Cleanliness of bare circuit boards increases in importance with advances in PCB technology that continue to decrease conductor spacing. Inorganic contamination within printed circuit board fabrication can lead to electrochemical migration. Electrochemical migration is the dissolution and movement of metal ions in presence of electric potential, which results in the growth of dendritic structures between anode and cathode. These dendritic growths, which were minimal over periods of time, were not a concern of "yesterdays" bare boards.

As conductor widths and spacing continue to shrink, ionic contamination that propagates dendritic growth becomes much more alarming. Surprisingly, many circuit board assemblers continue to not address PCB cleanliness with their bare board fabricators or they rely on board cleanliness specifications, set by the military, over 30 years ago.

Currently the specification reads "the contamination level shall not be greater than an equivalent of 1.56 µg/cm2 (10.06 µg/in2) of sodium chloride." Many prints and drawings still have that statement as the overall final cleanliness of the bare board, as supplied. The military specification, however, was originated for bare board production panels BEFORE the application of solder mask. The fear was that high levels of ionic contamination entrapped underneath solder mask, would affect the solder mask adhesion, leading to blistering, voiding, and peeling of solder mask.

When testing finished bare circuit boards for ionic cleanliness, IPC 6012 states that the PCB will be tested per Resistance Of Solvent Extraction (ROSE) method, and meet procurement documentation. It is ultimately the designer's decision, and though using the military standard as a baseline is a good start, it should be seriously revisited with higher technology boards. 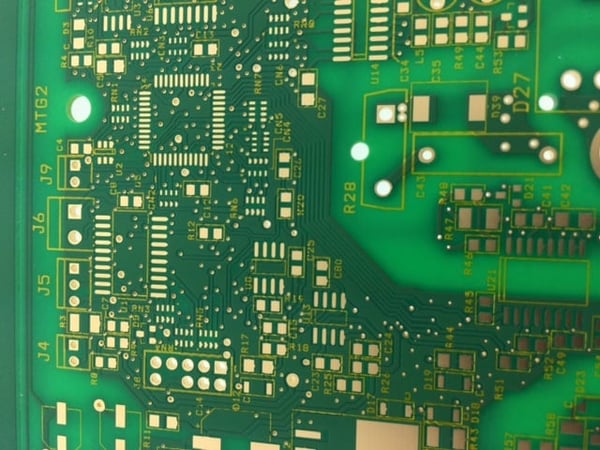 Cleaner finishes such as ENIG, are beneficial in attaining a cleaner PCB

In 2010, IPC released IPC-5704, a cleanliness requirement for unpopulated printed boards, aka bare boards. In this standard the inorganic ions are broken down whereas previously only sodium chloride was mentioned. The common and popular testing methods ROSE, Omega-meter, and Ionograph could only measure the basic chlorides with a low sensitivity level. To achieve the breakdown of inorganic ions published in IPC-5704, Ion Chromatography testing is required. In 5704, IPC does state the maximum contamination limits of individual ions at levels comparable to today's technologies and processes but, the standard has not gained much popularity. The high cost of ion chromatograph equipment and testing has kept many suppliers and users from accepting it. It is important to note that the standard does state that Ion Chromatograph testing shall be used to disposition non-conformances derived from the standard testing methods.

The source of this contamination lies with the chloride chemistries used in plating and final finish processes. Another considerable contributor is the pre-fluxing of hot air solder level and lead free hot air solder level. Printed circuit board fabricators have improved their processes by immediately rinsing after plating. Residues are more difficult to remove with delays, using weak acid baths help neutralize the ions and using DI water in all rinsing and cleaning processes. Using tap water is deeply frowned upon as the ions introduced by tap water could negate any plating ions being removed. The move to non-solder surface finishes, such as ENIG, has helped remove flux contamination from the circuit board fabrication process. These process improvements and the move toward lead free cleaner surface finishes, has helped achieve a considerably cleaner bare board as compared to 20 years ago.

When Extreme PCB Cleanliness is Required

If extreme cleanliness of bare boards (levels less than 0.63µg/cm2, 4.0µg/in2) are required, it is best to design the PCB part with as few "exposed laminate" areas as possible. Ions tend to wash easily off metal and solder mask surfaces, but can linger with board areas not covered by plating or solder mask. This exposed laminate can entrap ionic contamination and final board cleaning processes may be challenged to remove these entrapped contaminates. These contaminates will now leech out during ion chromatograph testing, affecting the results.