The use of capacitive touch switch technology is widespread and becoming more frequent each day. Capacitive touch switches are common on thousands of everyday devices including gas station pumps, smartphones, lamps, automobile dashboards, and even the smart speaker in your home.

Some of the benefits of using a capacitive touch switch are its customization ability, transparency options (allowing for a wide range of backlighting options), and there are no moving parts.

These types of switches offer a high reliability and low-cost solution for applications that can benefit from a low-profile switch design. Capacitive touch switches can be incorporated into complex backlighting schemes or sleek faceplates offering that nextgen look designers strive for.

Capacitive touch switches operate by creating an electric field that is continuously monitored by a microcontroller. Upon disturbing the electric field, changes in capacitance are sensed, triggering a switch closure event. The capacitance change in the electric field can be triggered by a human finger, gloved finger, stylus, or anything with similar electrical properties to a human finger. The capacitive touch switches can then be calibrated to respond appropriately for the intended use case.

The actual sensors or electrodes on a capacitive touch switch are quite simple in design. For a capacitive touch switch to function, both positive and negative polarity conductive features must be designed with an air gap or insulating material separating the two. The electrodes’ exact shape is not critical. In fact, the electrodes shape can be customized to any shape of switch required. Their shape can be a circle, square, or even a large customized shape. What is important is that the electrodes are fabricated using a conductive material and that there are both positive and negative polarity sides of the electrode.

On these types of switches, the electrical signals are routed off the switch panel via a tail, flat flexible cable, or other type of wire harness. The end of the flex tail or cable can be terminated with any appropriate connector as no specialty interconnects are required for supporting capacitive touch technologies. 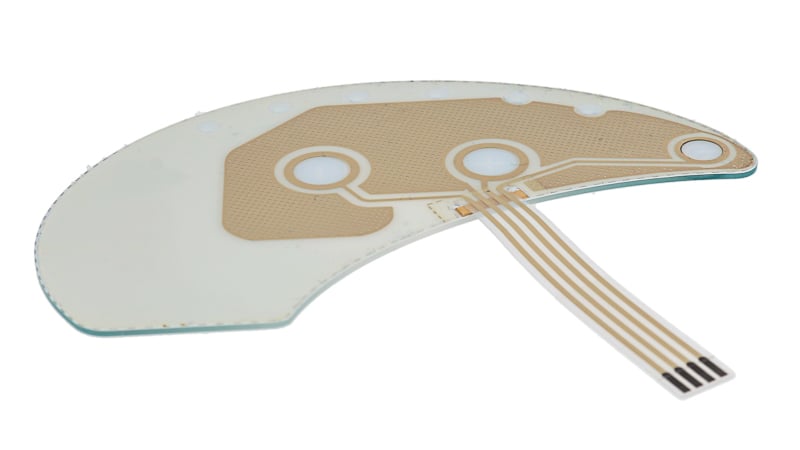 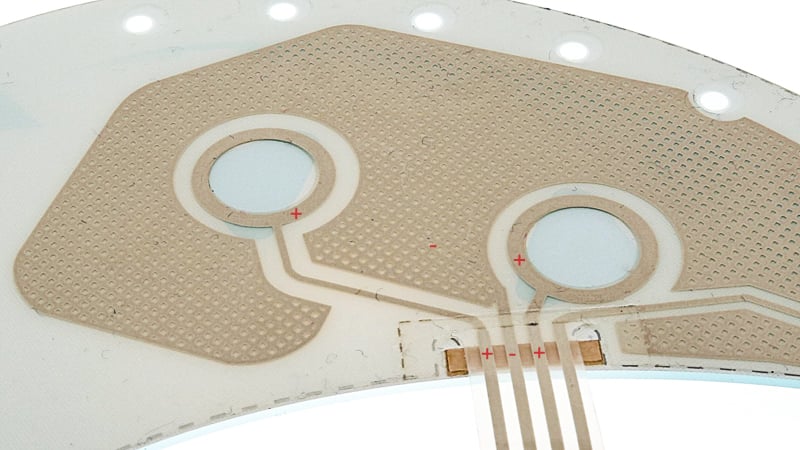 This type of design option uses conductive materials like copper or conductive ink, but the shape of the sensor pad provides a “transparent” window in the center of the switch with conductive material around the perimeter. This type of switch provides minimal risk in the material selection, but the shape, size, and operation of the switch itself must be tested. The capacitance field created must be sized to be able to detect a switch registration with the paired microcontroller. It’s recommended to mockup the final design and incorporate the overlay or any additional material layers for the evaluation. 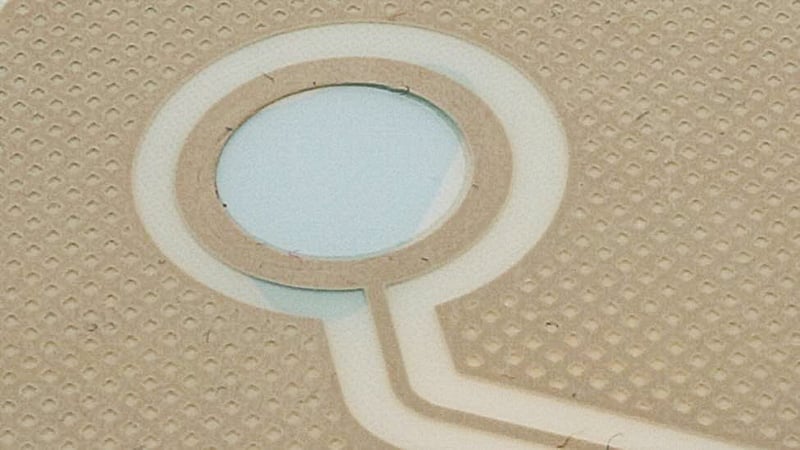 The two most common materials used are ITO and transparent ink. There are additional transparent highly conductive materials that are more exotic and best considered for specialty applications outside the world of touchscreens and capacitive touch switches. Indium tin oxide (ITO) is a material that when applied to substrates as a thin film, exhibits exceptional electrical conductivity and optical transparency.

There are also transparent conductive inks that can be screened on to a flexible substrate like PET (polyester), providing an optically clear circuit. Typically, these materials offer a 70% or greater optical transmission, with much of this performance coming from how the material is applied and how the additional layers are laminated to one another. 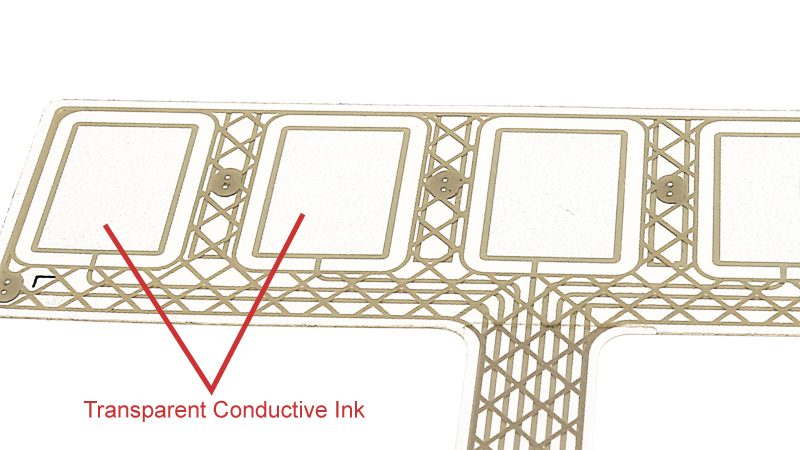 3. Incorporate Backlighting Above the Circuit

If the ultimate goal is to develop a sophisticated backlighting scheme, this can be accomplished through the use of an ordinary FR4 + copper base circuit with an integrated light guide film (LGF). Although the capacitive touch sensors are not transparent themselves, sandwiching the LGF layer between the circuit and overlay surface allows for the switches to be uniformly backlit, providing the appearance the button is “transparent.” The LGF works by placing a side firing LED within the laminated stack-up residing outside the viewing window. The LGF film helps disburse light to the desired areas. Although the circuit design is straightforward, care must be taken to properly select and size the overlay material since the dielectric constant and material thickness can negatively impact capacitive touch responsiveness. As always with any new design or product development activity, we recommend extensive testing to characterize and develop the switch system. 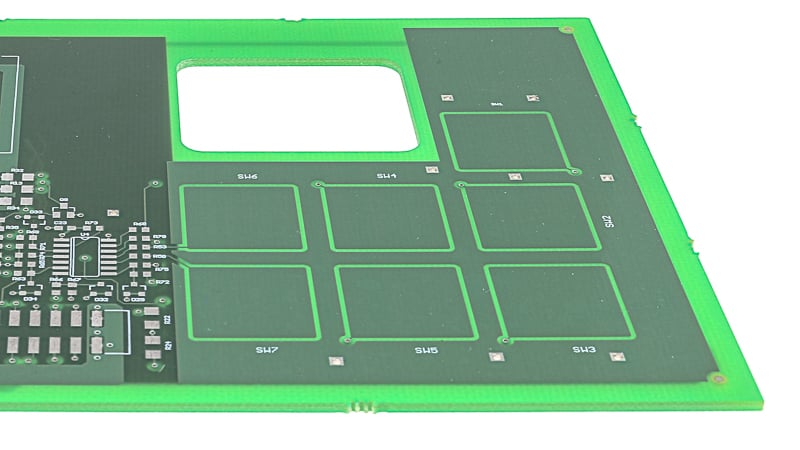 Example of a finger pressing a capacitive touch switch.

Some transparent capacitive touch panels use ultra-fine meshes that are not visible unless examined under magnification. These technologies use thin wire meshes of conductive materials and build a grid-like structure. Imagine the insect screen in your home’s window but much smaller and designed for high-electrical conductivity. The intellectual property for many of these materials (both inks and meshes), processes, and the physical characteristics themselves is somewhat limited. Data sheets contain minimal information since some manufacturers are reluctant to share even the most arbitrary information. This means that samples and testing are critical before any design freeze since the exact electrical conductivity or optical transparency may be missing from the data sheets you desire. Plan on including a small quantity of samples for development in your build plan.

Capacitive touch devices are an excellent choice for products that require ultra-high reliability, additional levels of customization, and the sleek nextgen look and feel that many designers strive for. Incorporating transparent buttons and switches into the capacitive touch class of product allows for even more customization and advanced functionality for designers and engineers. The use of this technology also opens the door for options that include selective backlighting, buttons that can serve as viewing windows, and other advanced forms of backlight integration. It’s clear that not all projects warrant the additional development required for integrating a capacitive touch switch, but if transparent switches are required for your project, there is no better choice than a capacitive touch switch designed by Epec.