Inductive charging is the process of charging an object without any contact between it and any sort of charger or another charged object, and it can seem like magic. With no wires or visible connections, devices gather a full charge, so how is this possible?

It’s not magic. Induction charging depends on a simple phenomenon known as the law of conservation of charge. A conductive object spreads its charge equally across its entire mass, allowing electrons to flow freely. Conductors allow for charge transfer through this free flow of electrons. When it comes to charge, opposites attract and like repels, so the flow of electrons between two objects will depend on their respective charges. When an insulator such as a stand or mat exists between the objects, it must be induced to accept a charge, which it will then freely pass along to the other object. 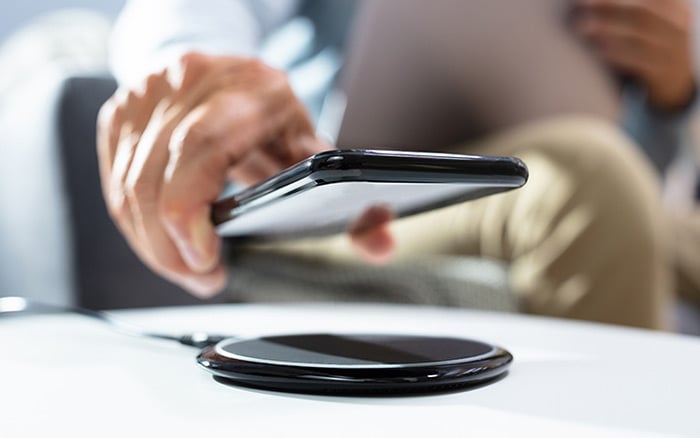 In 2006, researchers at MIT were able to power a 60-watt light bulb from a power source more than seven feet away with no physical connection to the light bulb. The researchers called this WiTricity. The science behind the feat was the use of magnetically coupled resonant objects, which typically resist losing energy to surrounding uncoupled objects. The resistance holds true even if the uncoupled objects are closer than the coupled items, enabling efficient energy transfer.

Induction charging has been fueled by the proliferation of mobile devices. In 2009, Energizer introduced an inductive charger for Wii remotes, but the idea really took off when the Wireless Power Consortium agreed on the Qi standard. Qi is pronounced “chee” and it refers to the Chinese word for natural energy running through the world. Up until the approval of Qi, there were a variety of competing technologies, including one from Palm and several that used customized gel-like cases and companion mats for cell various cell phone models, including the iPhone. In 2012, Nokia introduced the first cellphones that used Qi for charging, quickly followed by new models from LG and Motorola. Energizer introduced a mat that could charge any device equipped with its special case. Today, there are a wide selection of mobile devices, including cell phones, PCs, and fitness trackers that use Qi or other induction charging technologies.

While induction charging garners most of the excitement about wireless charging, it is not the only technology that offers wireless capabilities. Radio charging and resonance charging are also in widespread use.

Radio charging is often used for low-power devices that are used within 30 feet of the transmitter. It is often used for implantable medical devices, RFID chips, watches, hearing aids, and virtual reality devices. Some of these charging systems require placing the device to be charged in a special box or container that receives the radio waves and converts them into DC power.

Many electric vehicles and large-powered devices use resonance charging. In this instance, magnetic resonance is passed between sending and receiving coils that convert to power. Resonance charging has a shorter field than either radio or inductive charging since it requires three feet or less between the coils. Resonance charging becomes more efficient at higher wattages and shorter distances. Small voltage charging may be only 70 to 75 percent efficient, while a 100-watt device may approach 100 percent.

Induction charging still makes up the bulk of wireless charging applications because of its simplicity, range, and efficiency. Every year, hundreds of devices and charging platforms are introduced to the market to gain supremacy.

At CES 2015, both BMW and Volkswagen introduced inductive charging technologies for electric vehicles. The Alliance for Wireless Power and the Power Matters Alliance announced their decision to merge and work on a single wireless charging standard at the show. A wireless sleep headband, a wireless rechargeable mouse, and numerous other inductively charged products were introduced at the show, signaling the increased desire of the public to be freed from wires.

At CES 2016, the interest in inductive charging reached even higher levels. Handbags and briefcases that can power devices on the go were a hit, and new Qi cases for cell phones were everywhere. Inductive charging devices for Apple Watch were introduced and WiTricity introduced new chargers for PCs based on the MIT research cited above. Perhaps most interesting of all is a wireless transparent charging table that charges devices quickly. Even IKEA introduced furniture that charges devices without wires.

Travelers will seemingly be freed from the need to carry multiple chargers and dongles to charge all their devices, and the airport scramble for the seats in range of scarce outlets may become a thing of the past.

Aside from the ability to rationalize the number of attachments travelers carry and the elimination of the unsightly tangle of wires that litter nearly every home, inductive charging offers multiple benefits to the user.

Many people will enjoy the convenience of being able to drop their devices on a table or desk when they return home and have the units begin charging automatically. They will no longer have to remember to plug them in or risk running short of power the next day. On-the-go charging powered by motion or by the bag on a shoulder means users never have to worry about running out of power while on the go. Critical conversations on mobile devices can continue to their natural conclusion instead of being cut short by low power situations.

In addition, travelers will never be forced to sit on the floor at airports because it’s the only seat within range of a working power outlet. Travelers can also stop worrying about leaving a critical adapter behind in an airport or hotel room. PCs and mobile devices will stay charged for the entire duration of a long flight, enabling users to be more productive.

Drivers of electric vehicles will be relieved from “range worry” as more efficient induction technology helps them to recharge vehicles faster. Induction charging may also enable them to stop worrying about the location of public charging stations, since they may be able to recharge on the go or by parking on a special mat they carry with them or store in the garage.

As the public interest and adoption of inductively charged devices continues to grow, there will be an increased demand for a single standard used by all devices. Despite the agreement between the Alliance for Wireless Power and the Power Matters Alliance, now known as the AirFuel Alliance, there is still at least one other industry alliance working on a competing standard. Public pressure and the influence of device manufacturers will likely force an agreement on a single standard, and perhaps a further consolidation of industry standards organizations to help facilitate that.

In early 2016, the AirFuel Alliance received global regulatory approval for its new standard, paving the way for rapid proliferation of devices and form factors. The alliance is also working on a standard that unifies induction and resonant technologies so that devices would interoperate seamlessly. The organization believes that wireless charging will be the new standard within a very short timeframe.

The number of inductively charged devices and induction charging form factors will continue to grow; people will adopt them quickly. Hotels, airports, trains, and even cars and new furniture will come standard with inductive charging capabilities that simplify our lives. People will stop worrying about the battery life of the devices they carry, and the manufacturers and designers will be less bound by the size of the batteries they can include since devices will easily charge on the go.

We will see smaller smart watches, slimmer phones, lighter PCs, and many more wearable devices that monitor our health and fitness. Implanted medical devices, for example, will become smaller and less intrusive in our daily lives, and the elimination of the need for periodic battery replacement will make life easier for patients who will no longer face repeated surgeries simply to replace batteries.

Airports and travel depots, which are only now beginning to catch up to the need for power outlets, will be able to include inductive charging capabilities in every seat, making life easier for travelers.

We will also see the introduction of more everyday items for the home that can benefit from wireless charging. Eliminating cords from the devices that perform such everyday tasks as vacuuming, ironing, or blow-drying hair will make these activities safer and simpler. Desks will be neater with no cords snaking across the top, and many of our devices will recharge wherever and whenever we put them down.

Inductive charging is finally reaching critical mass, and most people can’t wait to say goodbye to the wires tethering them to power outlets.