How to Specify Dielectric Call-outs in Your PCB Design 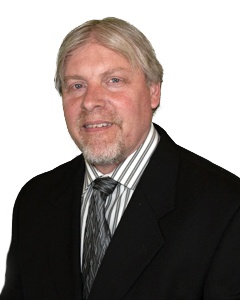 As printed circuit boards (PCBs) progressed, requiring their functions to be more and more complex and diverse, the number of layers increased from 1-2 layers, up to 4-30 layers, with 4-12-layer boards being more typical.

The stack-up (build), includes copper cores and prepregs to hold the layers together. These are the dielectrics. The simple definition of “dielectric” is an insulating material that allows electric fields to pass through it. It is not an insulator that stops electrical fields. Dielectrics can actually store charges, where insulators only cannot.

First, a capacitor, which stores electrical energy, can do so without a dielectric. But, when a dielectric is added in, and even though the capacitor’s ability to store power remains the same, the dielectric lowers the electronic field and the voltage of the capacitor. This makes the capacitor more efficient in storing energy.

Dielectrics cause the charged electrons that enter it when voltage is applied; to polarize, negative electrons become positive, curtailing just how far into the dielectric they can travel. Also, the amount of this polarization of electrons directly influences the amount of energy that is stored. Specifying dielectrics then has a direct impact on what your PCB is designed to do and how much power will be sent through it.

Dielectrics have several characteristic values given to them to differentiate what they can handle for your project.

So, all these items on the material spec sheet can be referenced to choose the correct material dielectric for the electrical PCB design.

Also, in multilayer PCBs, prepregs are used. The above FR4 example is used for a core, which has copper laminated onto it, and the material is also already hardened and cured. Prepregs do not have copper and are not cured, so that the resin inside can melt and be used as an adhesive to hold the multilayer together. So, for stack-ups, cores and prepregs can be chosen to reach the desired overall board thickness and spacing between layers.

If you look at the table below, the first parameter lists the resin content, which refers to how much of the prepreg will melt into an adhesive. Then the thickness is shown, which matters, of course, for the final board thickness.

Then, the dielectric constants and dissipation factors are shown. The dielectric constant, in simple terms, is how much energy will permeate out of the capacitor, thereby affecting the amount of energy stored. This number reflects how much polarization occurs. So, the higher the number, the better for stabilizing charges. The dissipation factor is the measurement of the rate of energy loss.

In the table, one of the 1078 prepregs has the best dielectric constant and average dissipation factor. This is a simple view without getting heavy into physics and electrical engineering. For building a bare multilayer PCB, we as a manufacturer just need to know a few things: overall board thickness, finished copper weights, and core material required. The prepregs can be adjusted to create a balanced construction or offset to accommodate controlled impedance requirements. 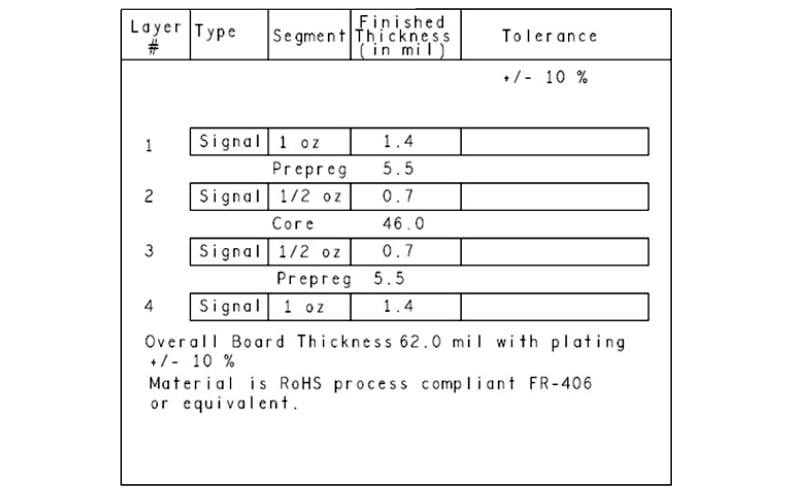 Example of a 4-layer PCB stack-up.

This stack-up illustration above includes the finished copper weights. It shows the prepreg thickness, the core thickness, and the final overall thickness. This type of stack-up allows the PCB manufacturer to choose the prepregs and adjust for a good balanced build. A stack-up can be very detailed, although this can limit manufacturers and add cost. 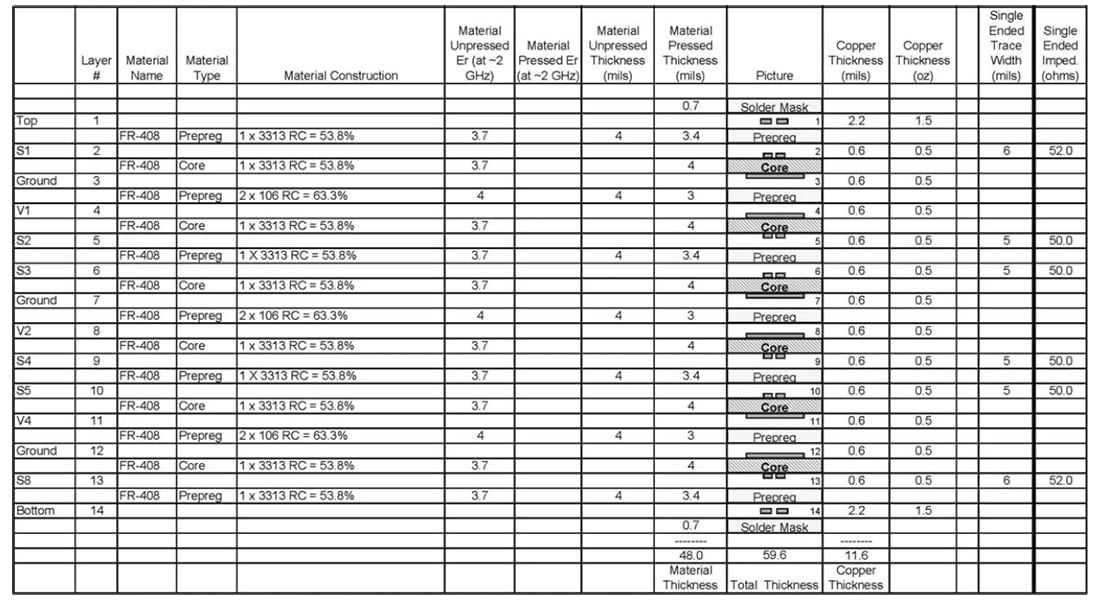 Example of a 14-layer PCB stack-up.

Circuit board stack-ups, like the one shown above are more complex. Usually however, when a stack-up like this is presented to a manufacturer, changes will be requested, especially when the manufacturer calculates for the impedances.

For a PCB manufacturer, the simpler or more generic the stack-up, the better. Only a few items of information are usually needed:

Flex and rigid-flex circuit boards have some differences in the stack-ups. They require what is called no flow prepregs, which are almost the same, just that the resin is more cured so that it does not make a mess at the rigid to flex transition areas. Other than that, the rigid areas are built the same other than the polyimide adhesiveless cores are added in.

Example of a rigid-flex PCB stack-up.

PCB designers create a layout of a PCB to achieve a reliable circuit board that does all the functions desired. Thus, it becomes very important for the PCB manufacturer to receive the pertinent information. The PCB stack-up becomes a vital part of that information besides the fabrication notes and the drill chart. The stack-up reveals the desired copper weights to handle the current and impedance requirements. Also, the desired spacing between layers and overall board thickness will come out correct. Reliable communication between PCB designers and PCB manufacturers results in a great quality and successful printed circuit board.