Why Should You Use Alkaline Batteries in Your Application?

Although the progress of technology moves fast and batteries are more popular for supporting mobile devices, it should be noted that the actual battery chemistries haven’t changed much over the last several years. The shift in hand-held devices are for rechargeable solutions with more energy and lighter weight which targets lithium chemistry.

However, there is still a big demand for alkaline batteries because they provide a higher discharge, are very economical, and have a long storage life. We are still producing some unique alkaline battery packs that are used in commercial and military applications. Some for ocean data collection, tracking devices, and other various uses.

An alkaline battery is a type of a dry cell primary battery that uses the chemical reaction of zinc and magnesium oxide and an alkaline electrolyte of potassium hydroxide to generate electric current. It is currently the most popular type of disposable battery in the market. Other common applications include small electronic devices such as clocks and flashlights, as well as portable radios and electronic toys. 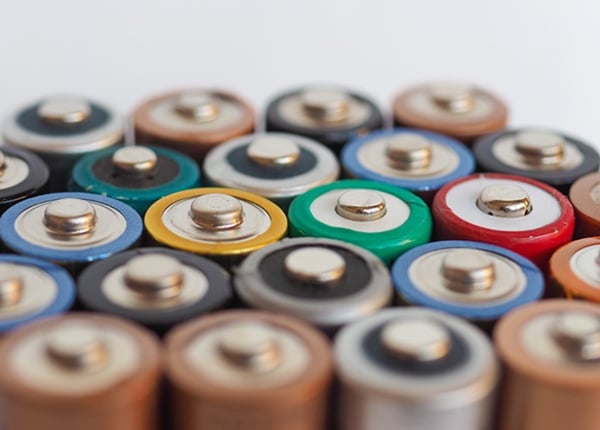 Using Alkaline Batteries in Your Application

Note that an alkaline battery is a primary battery. It is intended for disposal upon single use. However, manufacturers have come up with specially designed battery cells to produce rechargeable alkaline batteries.

How Does Alkaline Work?

Chemical reactions transpire in the anode and cathode due to their individual interactions with the ions from the alkaline electrolyte solution of potassium hydroxide.

In the zinc anode, an interaction with ions of potassium hydroxide causes a buildup of excess electron. This buildup results in an electrical difference between the anode and cathode. Furthermore, because of the buildup of electrons in the zinc anode, they would have the natural tendency to move somewhere else. In an alkaline battery, these excess electrons should move in the magnesium oxide cathode. This is impossible by default because there is no direct connection between the anode and the magnesium cathode.

One of the advantages of alkaline batteries over other primary batteries and rechargeable batteries is that it has higher energy density. For example, this battery has double the energy density of a Leclanché cell and zinc-carbon batteries. This allows the battery to produce the same energy while lasting longer than other batteries.

The rechargeable variant of this battery also has four times the capacity of an equivalent nickel cadmium or nickel metal hydride batteries.

Longevity is another advantage of alkaline battery. It has longer shelf life than batteries with chloride-type electrolyte. It could last to up to seven years unused, losing about five percent of its energy every year. This means that it does not easily run out of power while not in use. This battery also functions even at very low temperatures. Susceptibility to leakage is also low compared to a Leclanché cell battery.

Safety is also another advantage of alkaline battery. Compared with acid-based and lead-based counterparts, this battery has lesser environmental impact. It does not require any special disposal methods. The compounds inside an alkaline battery do not pose serious health issues except from mild irritations.

Alkaline chemistry is manufactured in your standard size models which makes it easier for engineers to design to and access cells to validate proof of concepts and prototype beta builds. Alkaline batteries can be stung in series to create high voltage packs and can be configured in many options to fit many types of requirements.

Alkaline batteries are composed primarily of common metals such as steel, zinc, and manganese and do not pose a health or environmental risk during normal use or disposal. Since the early 1990’s mercury has been removed from the chemistry makeup, so they can safely be disposed with normal household waste, everywhere but California.

An Alkaline battery pack is also a very good candidate for potting, which we do for several custom applications. Being a primary chemistry, no charging/cycling would need to be performed so the cells don’t experience the typical heating, internal temperature changes, or potential gassing that a rechargeable battery sees.

Leakage is also possible in alkaline batteries although Leclanché cell and zinc-carbon batteries have higher susceptibility. When left in devices for too long, the battery can leak, and the leaked materials can corrode circuits.

When choosing your battery type, the alkaline chemistry has been shown to have many positive advantages such as low cost, easily accessible, standard sizes, high energy, etc. Of course, there are always some drawbacks, but the advantages often outweigh those disadvantages in many common applications, so the alkaline battery remains a popular choice throughout many market segments.