What to Expect for Battery Development Timelines

Customers requiring batteries for their products or applications have become savvier when it comes to the developmental phase of the battery packs. They understand that by having researched power requirements, dimensions of the pack compartment, battery chemistries, and cabling specifications, the customer can develop more comprehensive design documents. Then, the battery pack manufacturer can use these specifications to get started on the development and tooling stage immediately.

Figuring out the battery development timeline allows a customer to understand when they will have the battery pack completed for time-to-market. They will be able to adjust deadlines as well as consider required battery testing, tooling creation, battery enclosure creation, and programming of the fuel gauge’s integrated circuit, among other factors.

About the Battery Development Process 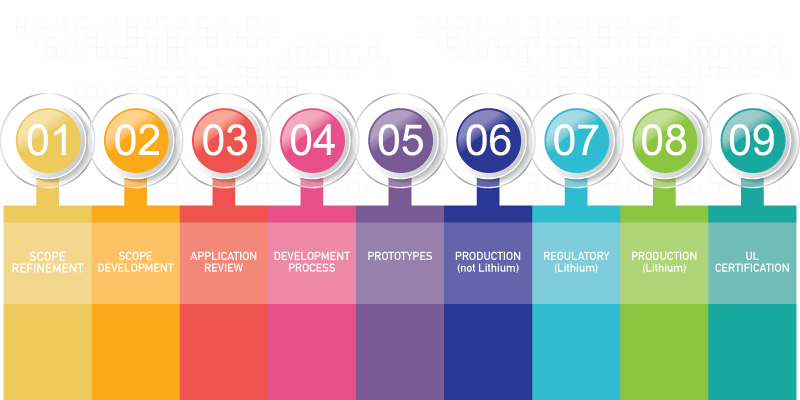 Our battery development timeline is a result of what is required on an average basis.

After the battery’s work scope has been confirmed, then the battery development process can get underway. This process will involve a multitude of individual steps that include control circuitry design, Gerber data creation, the project’s bill of materials (BOM), the prototype’s material procurement, developing the prototype, having the prototype run on the printed circuit board assembly (PCBA), testing, and the prototype battery pack assembly. There may also be prototypes created that will need to be sent off to certifying organizations for testing based on the battery's chemistry (lithium-based).

The amount of electronics specified and what will be added into the final design will impact the lead times for the battery’s development. The electrical design and testing timeline can take about 4 to 6 weeks, while the software/firmware design to program the electronics can take 4 to 5 weeks. Placing in additional electronics to create a smart battery pack may increase these timelines depending on what the customer decides to have in the battery pack.

If desiring a fuel gauge for the battery pack, an algorithm will be programmed into the IC to tell the customer about the state of charge (SoC) and the state of health (SoH) of the battery pack. There are three different algorithms that may be used: voltage lookup, Coulomb counting, and a combination voltage lookup/Coulomb counting. A learn function may also be programmed into the IC for the fuel gauge.

Developing and testing the fuel gauge may also increase the lead times depending on the number of functions programmed into the IC and when calibrating the IC. Calibrating a fuel gauge requires taking a fuel gauge that has already been properly configured and measuring the current, voltage and temperature. These measurements will be logged during periodic intervals.

One of the factors that takes an extraordinary amount of time is creating the battery enclosure for the product or application. There are many steps that are involved, including gathering the right materials and determining the size of the enclosure based on both the product as well as the battery pack. Tooling the battery enclosure using fused deposit modeling (FDM) can help to speed up the process to create conceptual and engineering models along with the enclosure prototype. However, for customers who have tight deadlines, 3D printing can shorten the amount of time to market.

Enclosures that will be inside products, outside of products with detachable covers, or made from plastic will be created using injection molded plastics. Injection molding is where several parts of the enclosure will be made from injecting molten thermoplastic into a mold and then cooled into shape before being taken out of the mold. Creating the tooling for injection molding can take anywhere from 8 to 10 weeks.

Regulatory testing and certifications timelines will always be dependent on the organization that will be performing the tests. One thing to keep in mind is that you may cause delays to your battery pack development if you send out 3D-printed enclosures with the battery packs instead of waiting for the injection molding tooling and plastic enclosures to be created. Organizations such as UL and IEC require the injection molded parts that will be used in production to be submitted with the battery packs in order to receive certification.

Depending on the regulatory and certifying organization, typical timelines are:

Battery electronics are normally tested before assembly. The circuits will be tested by building a fixture as a power supply and electronic load will be configured to mimic the cell pack, load, and battery charger. Once all the circuits have been tested for any failures, the cells will then be installed into the battery pack. After the battery pack’s final assembly, a load test will be performed to ensure the pack is working as specified.

Inspection points that are performed during the battery testing include:

The timeline for battery testing will vary greatly depending on the complexity of the battery pack. Each battery prototype is bench tested before being submitted to the customer, who may perform their own product testing based on their requirements. For simple battery pack designs, there may be quick approval within several weeks. More complex batteries or comprehensive battery testing could take several months.

There are no set timelines when it comes to battery pack development. While the lead times discussed above are what have been typically noted for our manufacturing processes, these timelines can change based on numerous design factors. Speaking with our team at the very beginning of the project will allow us to understand the battery pack design and specifications. Then we can provide more precise timelines based on the project’s specifications.