New Normal. What is the New Normal? For those of us who work in electronics, most days it feels like a foreign concept. When you consider what our collective industries have gone through since 2018, when the U.S. vs. China trade war started, and the Section 232 and Section 301 tariffs went into effect, now into this Chinese New Year (CNY) and the global Coronavirus pandemic, it seems like the answer to that question is: normal is something we may never see again.

Talking to many of my peers in supply chain and operations management at the end of 2019, there was a collective feeling that if we could “just get through” the CNY 2020, things would start to get back to “normal.” The 2019 peak season was as challenging as we expected it to be, and then in early February, 2- and 4-layer PCBs were given an exception to the Section 301 tariffs. Everything was starting to come together … until it wasn’t.

We all know our industry, and our lives haven’t been the same since the start of the CNY. Very quickly after the extended China shutdown, the U.S. and the rest of the world began their own. No amount of CNY planning would have had anyone prepared for what was about it come. So here we sit as an industry, 13 weeks after the end of the CNY. And instead of “business as usual,” we find ourselves in this daily concept of a “new normal.”

Reduced Capacity in the Air from Shutdown of Commercial Flights

While manufacturing is coming back online at almost full force in China, for the first time since the CNY, now that most of their domestic travel bans have been lifted, we face the bigger, unintended consequence of all of the global lockdowns. With the reduction of commercial airline flights, and the increase in home shopping, we have created an alternative peak season shipping scenario, one that is more like the Bermuda Triangle of logistics problems. On one side, you have an almost 40% reduction in commercial flights. Most of us don’t realize when we are boarding a plane either for work or vacation, that the majority of the wide belly is dedicated to cargo shipments. 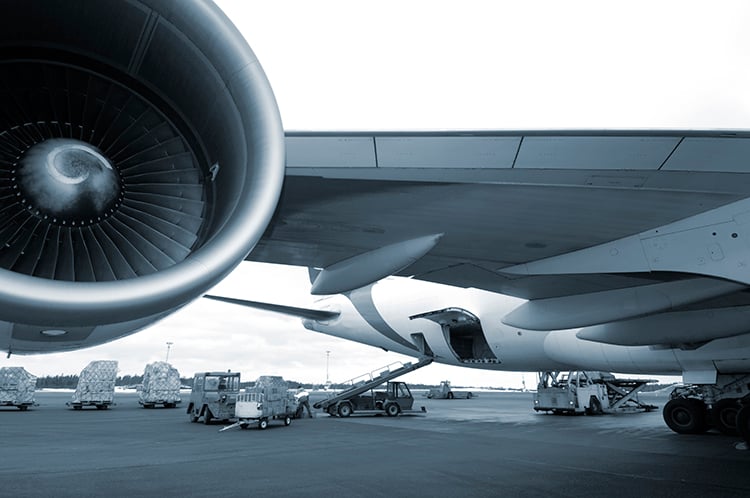 Secondly, due to the extended China shutdown immediately following the CNY, there was congestion at the ports/hubs/customs in China. Now you have all of China’s manufacturing racing to catch up to that 2-5-week (depending on the area) shutdown, as well as the increased production of COVID-19 related medical supply production, has created a log jam in booking what capacity is available.

The third part of the challenge is shelter-in-place orders have created a new demand for home delivery that has never been seen before. Even during the holiday peak season shipping crunch, the majority of deliveries were still to commercial facilities, where the end customer will come pick them up. This is no longer the case. We all know the reasons why people are ordering more to their homes: supply chain shortages, fear-based buying, social distancing in stores, and so on.

Since March, 70% of UPS domestic packages were residential deliveries. The smaller parcels and increased stops required for this residential increase (as many businesses are forced to close as non-essential) has impacted not only the operating margin for UPS but also the capacity available to process packages.

So, what does this “new normal,” or as it is still being called “Peak 2.0,” look like for those of us still working?

The simple answer is: crowded.

The complicated answer is: hands-on.

What we used to take for granted, things like contract pricing, unlimited capacity, and guaranteed delivery times no longer apply. As of today, UPS is running a $0.34/lb. surcharge on China-US lanes. DHL and FedEx are running at a $0.90/lb. surcharge. On March 9, 2020, the average charge coming from China into the U.S. for air shipments were $3.49/kg. By April 6, 2020, that was up to $5.83/kg. Even while drafting this blog post, DHL announced a price increase.

IATA announced in early April that shipments were up 15% YOY in March, at the same time the shipping industry was losing almost 25% of its commercial airline capacity. UPS has been quoted as saying that they are “playing musical planes,” trying to move their fleet to the routes that are under the most strain. Peak season surcharges are typically easy to predict and plan into your budget. They normally start anywhere from early October (depending on what Apple is doing) and end in early January.

These “peak season” charges are not only more than what we have historically seen, all three major carriers have announced that they are in place indefinitely. That is a significant increase to a shipping budget that was most likely planned during Q3 of 2019.

The next challenge is capacity. When you are talking about printed circuit board shipments, you are talking about a product that is dense and typically heavy. At Epec, we have very specific shipping specifications that dictate the weight, the inserts, even the box type and tape to make sure that the product is protected in transit.

For 9 months a year, shipping a heavy product is actually better; it helps you negotiate your contract. However, in this new normal, there are weight restrictions coming out of China to try and relieve some of the pressure on the supply chain. As of today, the weight restriction per factory in China for UPS is 300 kg/day, which sounds like far more than it really is. At one-point last week, UPS had a backup of over 33,000 kgs waiting to get on planes in just their Shenzhen hub. As an example of the “musical planes” UPS is quoted to be playing, in order to get around this problem they had to put a charter plane on this route to start moving the cargo at a cost of over $750,000.

At Epec, we avoid this challenge by consolidating all our shipments in Hong Kong, where they are less likely to have as restrictive of a weight limit. We also use the total number of kgs we ship per year not only to ensure that we have the most competitive rates for our customers, but also to negotiate our own capacity limitations. We have a weight restriction of 1,400 kg/day, so we avoid any down time waiting for a plane.

The challenge that fewer people are talking about is the suspension of service guarantees. All three major carriers have announced an indefinite suspension to their daily service guarantees, and DHL went as far as to declare force majeure in March. The obvious issue to our customers is your delivery time, and depending on where you are located is no longer guaranteed.

There is a growing speculation around the supply chain industry, however, that these suspensions may become permanent, as it is a way for the carriers to claw back the margin they are losing to the increased residential deliveries. When you are considering home deliveries, most of us would agree that if your package was delivered at 10 a.m., or 4 p.m., there isn’t too much of a difference. It’s safe to say that the days of 2-day Amazon Prime delivery are behind us for a while. However, when you are running a business, and most of us are running just-in-time, that is a significant difference in what you are able to do.

At Epec, roughly 65% of the packages that we receive on a given day are shipping back out to customers within a 72-hour window, which means we need to receive them, put them through incoming inspection, perform whatever value-added service is required, repackage, and ship. If we didn’t receive our packages until 2 p.m., or even 12 p.m., that would impact how we brought in our shipments. There simply wouldn’t be enough time in the day.

That goes true for every one of our customers. We all know the feeling of having a hot or late job that is critical for one of our customers, and it ships for early morning delivery but doesn’t get there until 11 a.m. Those lost hours are hard to make up. The suspension of this delivery guarantee allows the carriers to change their routes. For example, at Epec, we have remained open as an essential supplier to many essential businesses. However, about 50% of the industrial park that we are located in has been shut down. That doesn’t mean our driver just delivers and picks up at 50% less companies. Instead his route is redone to include over 120 residential addresses every day. Because there are no financial penalties to the carrier, they do this to maximize the drivers, as they are not only running out of plane space, but truck space as well. This will be one to keep an eye on, as the supply chain continues to change.

In the last 30 days I have been asked a variety of COVID-19 related questions that all start with “in your experience,” and my answer is typically the same. The majority of us have never experienced anything at like this at this level. We have been living through a trade war, have had regional natural disaster challenges, some more significant than others. But never have we seen the global supply chain put under this type of pressure with these types of restrictions. At this point, the strength of your partnerships is what is going to set you apart from everyone else.

Having our own office and employees in Shenzhen, China, as well as having our partnership with UPS, allows Epec to react quickly to the changes that are coming towards us. Everyone wants to know when this is going to be over, personally and professionally. From what I have seen and heard, we are looking at this Peak Season 2.0 lasting until July at least, if not through the remainder of 2020.