Lithium-Ion vs Lithium Iron Phosphate: What Markets They Support

When talking about custom battery packs for portable devices, the most common type mentioned has been lithium-based chemistries. Lithium-based batteries provide high-energy density and a light weight for applications, making them suitable for portable electronics that require long battery life to perform high-speed functions.

As for rechargeable batteries, special steps are taken with lithium-based batteries due to their chemistry being unstable than other battery types, such as NiCad and NiMH. They must undergo rigorous testing per UN/DOT 38.3 specifications as well as have battery management systems.

There are many types of lithium batteries available to customers. The two types that are most used are lithium-ion and lithium iron phosphate. When deciding on which battery chemistry to use, understanding the differences between these lithium-based batteries such as energy density, operation, and safety, can have a significant impact on your application.

Lithium iron phosphate (LiFePO4) has a graphite anode and an iron phosphate cathode. They are a newer technology than lithium-ion, as they are mostly found as EV car batteries and solar-powered lights.

Both chemistries work in the same manner. The lithium ions will begin to move from the positive electrode to the negative electrode, and vice versa, during charging and discharging cycles. 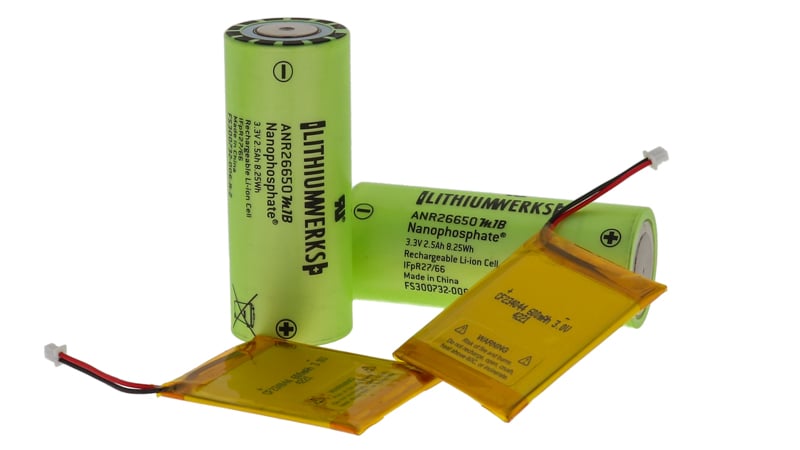 For energy density, there are big differences between these two battery chemistries. Both offer good density when compared to other chemistries. However, lithium-ion has a higher energy density. This battery type offers 150/200 Wh/kg for applications.

In comparison, lithium iron phosphate has an energy density of 90/120 Wh/kg. The battery still is a good choice when it comes to electronics that require batteries with higher levels of power. Yet the lithium-ion in this case is specifically chosen for high-speed electronics.

One thing to keep in mind is that lithium iron phosphate has a better discharge rate than lithium-ion. They discharge at 25C, especially at higher temperatures, and can go up to 1,000 to 10,000 charge/discharge cycles. As the capacity becomes reduced, the lithium iron phosphate experiences lower degradation. For lithium-ion, the discharge rate is about 10C as it can have about 500 to 1,000 charge/discharge cycles and can degrade faster at higher temperatures from the device's components.

Both types of batteries have a long life when used and handled properly. Lithium-iron phosphate can handle higher temperatures as they have a nominal voltage of 3.20 to 3.30 and a 2.5-3.65V/cell operating range. These batteries have stable chemistry to where it does not experience as many negative impacts from overcharging or short circuits. It has an exceptionally long shelf-life of 350 days.

Lithium-ion batteries have a shorter shelf-life of 300 days when compared to the other. Its chemistry is a bit more unstable when experiencing higher temperatures, short circuits, and overcharging. The operating range of lithium-ion batteries is 3.0 to 4.2V/cell for lithium manganese oxide and a nominal voltage of 3.70V. Lithium cobalt oxide batteries have a nominal voltage of 3.60V and the same operating range of 3.0 to 4.2V/cell.

For these reasons, EV car manufacturers look at lithium iron phosphate for electric motors. This type of battery chemistry is also used for medical devices and military devices as it is suitable for any application that requires long battery life and chemistry stability where safety is paramount.

Lithium-ion chemistries are unstable due to their higher energy densities. This chemistry will experience thermal runaway as it heats up faster during charging. This increase of heat can occur even when the lithium-ion battery is used at normal room temperatures as it can absorb the heat around it from the other working electronics inside the device. Also, lithium-ion batteries containing cobalt are considered hazardous due to the fact that cobalt is a toxic substance. It can cause severe medical issues as well as skin and eye irritation. Precautions must be taken for disposal, which can increase the manufacturing costs for customers.

Customers should keep in mind the industry and timelines regarding the testing of their lithium-based batteries. Different industries may require specific certifications from regulatory bodies. Testing times can fluctuate depending on the testing location, as it may take anywhere from 3 weeks up to 12 weeks for the testing to be completed.

Both lithium-based batteries are available in two types of cell forms: prismatic and cylindrical, based on the size of the application and the number of cells that will be required to reach the desired voltage.

When it comes to choosing a lithium-based battery for applications, lithium-ion and lithium iron phosphate are two choices when looking for high-powered batteries that also offer a long-life span. For any application where safety is an issue, lithium iron phosphate batteries are a good choice. For portable devices that require higher energy densities, lithium-ion batteries are typically used. Selecting the right cell chemistry and cell form will allow your application to run optimally for many years.