Sodium chloride, which is otherwise known as NaCl, table salt, or sea salt, is an important mineral that has found its way into all aspects of our everyday lives. Salt can be both a good and a bad thing, and this largely depends on the situation.

Salt is an excellent thing when generously applied to a basket of french fries, the rim of a margarita glass, or an untreated icy roadway. However, salt is less than desirable if it’s all over your car, if it’s covering your rusty fishing hooks, or if you’re concerned about high blood pressure. Salt is especially troublesome for human-machine interface (HMI) products such as keypads, touchscreens, and front panel assemblies since it has the power to corrode and contaminate electronics.

Many types of HMIs are used outdoors or in harsh conditions where saltwater and other debris can accumulate, impacting performance. Salt may corrode metals, blemish coatings, or even worse, find its way into poorly sealed enclosures. As saltwater permeates circuit boards and wire harness connectors, delicate electrical connections can become compromised due to a buildup of oxidation. As more oxidation forms, the circuit’s electrical resistance can increase resulting in a failure, typically in the form of an open circuit. For example, if saltwater enters the layers of a membrane switch, corrosion may form between the metal dome and the corresponding PCB pad. This anomaly will exhibit symptoms such as intermittent switch function, or a lack of switch function whatsoever.

Destructive analysis may be warranted to further study the actual failure mode and confirm if galvanic corrosion caused by salt exposure is in fact the root cause.

Salt deposits are another concern for designers since small amounts of salt can accumulate over time, creating reliability issues. Salt may collect in display corners, under buttons, and within exposed connectors, leaving a thick residue behind as moisture evaporates. Salt crystals can form and further wedge themselves into tight spaces, creating a leak path. Moving parts, hinges, and keycaps can all become gummed up by excessive salt deposits.

Since salt is everywhere, and it’s highly corrosive, many products that undergo environmental qualification are required to demonstrate that they can successfully operate after exposure to salt spray. Also known as salt fog, numerous test standards exist that cover military, aerospace, and industrial use-cases. All testing standards have the goal of simulating a lifetime’s worth of salt exposure and accelerating corrosion to reveal potential design flaws.

One of the most frequently performed corrosion tests is: Salt Fog per Method 509.5 of Mil-STD-810. This widely used environmental test standard defines the salt solution, the test setup, and the procedure to perform this test.

Using an apparatus known as a salt fog chamber, this vessel acts as a humidity chamber that recirculates warm moist air with a constant 5% salt solution and actively deposits salt onto the unit under test (UUT). Testing is performed by subjecting the UUT to repeated 24-hour exposures of an atomized salty mist followed by 24-hour drying cycles.

Test engineers monitor the salt fog fallout rate – the amount of salt that precipitates from the atomized salt fog mixture. Test technicians also track the solution’s pH and chamber temperature at planned intervals. The chamber temperature is maintained at a constant 35°C and held for the duration of the exposure. Testing is performed for several cycles that simulate months or years’ worth of abuse in a marine or salt-prone environment. 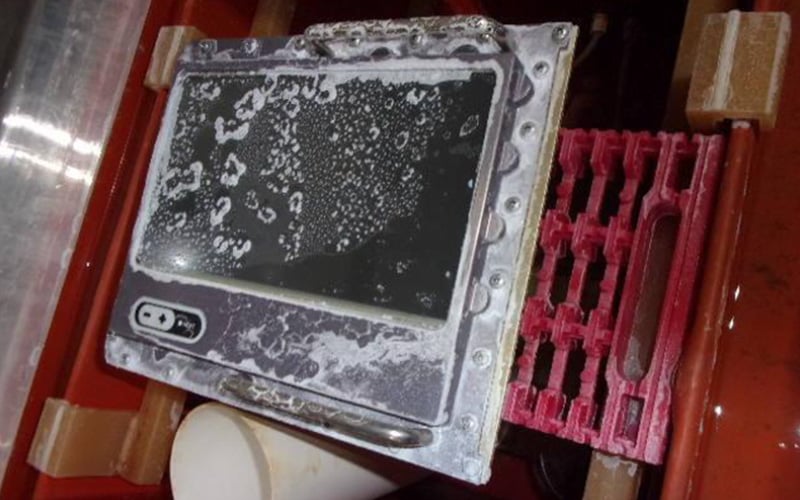 The goal of performing salt fog testing is to simulate a worst-case exposure to saltwater and evaluate a device’s ability to operate afterward. For this reason, it’s especially critical to develop a clear set of pass-fail criteria giving test engineers guidance on the specifics that constitute an actual test failure.

Cosmetic issues such as corrosion, oxidation, and excessive salt build-up are expected given the sheer amount of salt dissolved within the aqueous solution. For reference, the ocean is about 3% salt compared to the 5% salt solution that is used in Mil-STD-810 testing. Even materials such as chem-filmed aerospace-grade aluminum will exhibit heavy amounts of corrosion after exposure. If these issues are purely cosmetic, corrosion itself does not necessarily constitute a test failure. A keypad assembly can be removed from salt fog testing and be completely covered with salt and corrosion, but as long as the keypad powers up and all buttons work as intended, the test can be considered an ALL PASS.

Since the majority of salt fog chambers are roughly 10 cubic feet or smaller, most keypads and front panels have no trouble fitting inside the chamber. However, the challenge then becomes that some front panels must be mated to the rest of their housing or enclosure to achieve a watertight seal. This fact must be considered well before test day, otherwise, technicians may end up scrambling to make fixturing and setup changes, or worse, test results may indicate an undeserved qualification failure.

The goal of performing salt fog testing is to evaluate the impacts of salt deposits and corrosion on a particular device. Salt can cause moving parts to bind, narrow openings to clog, and electromechanical systems to fail.

Saltwater can also accelerate corrosion and create intermittent electrical issues if moisture passes seals or watertight gaskets. Performing salt exposure testing is critical for all new development projects, especially those for military and aerospace applications. Investing in a calibrated salt fog chamber may not be practical, but thankfully there are numerous accredited test labs across the United States that specialize in this capability. Still, this testing can cost several thousand dollars, take weeks to complete, and the testing may not always provide the results engineers expect.

Because of these facts, for free, engineers can perform preliminary testing with nothing more than kitchen salt from the breakroom and tap water. Simply dissolve a small amount of salt in warm water and spray this aqueous solution on the keypad, front panel, or instrument bezel. Allow the liquid to dry and repeat. Over time the salt will pool and accumulate in troublesome regions of the device. Perform functional tests periodically to determine if any ill effects are observed.

If building mock salt fog tests in your company’s breakroom is not an option, save the salt for brining a turkey and engage a full-service manufacturing partner like Epec for all your design for manufacturability concerns.

Early engagement with an engineering-focused supplier like Epec can help reduce costs and shorten development timelines for keypad and touchscreen assemblies with concerns regarding salt exposure, galvanic corrosion, and salt fog environmental testing.