ENEPIG (Electroless Nickel, Immersion Palladium, Immersion Gold) was derived out of the need to combat the challenge with the immersion gold process and Black Pad Syndrome. Black Pad (the hyper corrosion of underlying nickel) was baffling both PCB assemblers and manufacturers. After much analysis, the root cause was determined to be the nickel deposit. 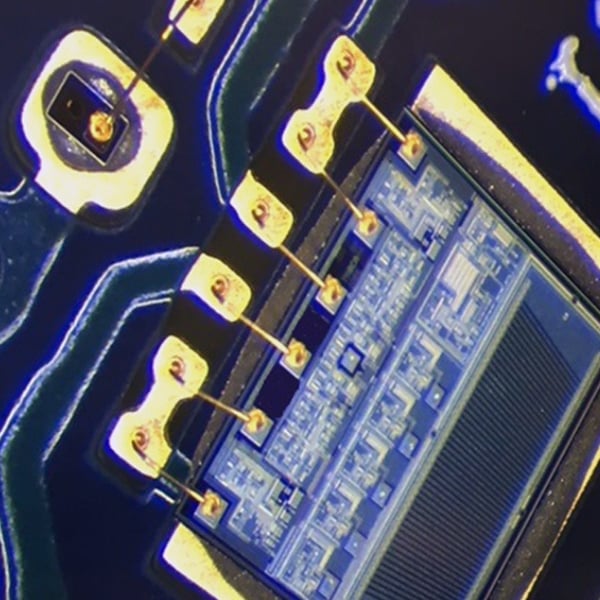 
What was causing the nickel to corrode at a high rate was still a mystery and while the industry moved to solve this, there was also a move to introduce a surface finish that could avoid the nickel issue. It was found that palladium acts as a diffusion barrier when deposited between the nickel and the gold. In other words, it allows the passage of the nickel electrons to the gold to continue the ion displacement with the gold and continued gold deposit but prevents the actual nickel to diffuse to the gold and bonding to its crystalline structure. This keeps the gold deposit pure and readily accommodating to wire bonding, a process not able to be performed on standard immersion gold.

However, before the benefits of ENEPIG be effectively marketed, the driving factor behind nickel and black pad was discovered (phosphorous). ENIG chemistries and processes were eventually fine-tuned to practically eliminate the black pad syndrome. The ENEPIG surface finish never gained any traction which is truly a shame, as it is still a superior finish to standard ENIG. Besides the ability to be a wire bondable surface finish, it also allows for a thicker deposit of gold as opposed to the standard ENIG which is self-limiting on the gold deposit.

Basically, when the surface of the nickel is completely covered by the gold deposit, ion displacement stops and the gold ceases to deposit. Gold measurements over 3 micro-inches is difficult to consistently maintain with standard ENIG and 4 or higher micro-inches cannot be considered. With ENEPIG, gold deposits as high as 6 to 7 micro-inches are easily processed due to the nature of the palladium barrier between the nickel and gold. One of our top customers who uses the ENEPIG surface finish for their wire bonding needs has been using the surface finish since 2012. Initially with this surface finish there were issues with dis-coloration, proper gold deposit thickness, and conformance to shape of pads. Since working with us, the finish has been consistent and functions flawlessly at assembly. 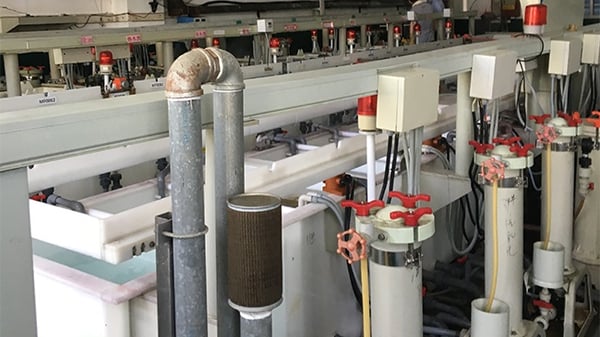 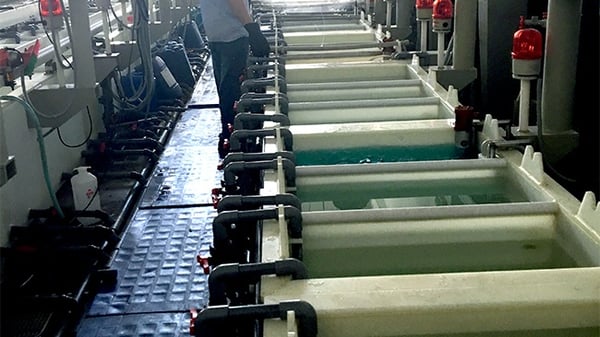 Before the application of any surface finish, the underlying copper must be thoroughly cleaned of any oils and contaminants from previous processes. These contaminants can impede the forthcoming processes such as micro-etching, and metal depositions. 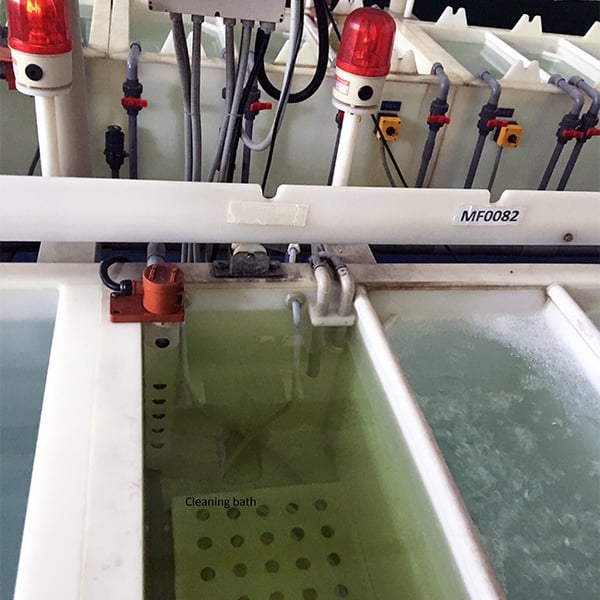 The micro-etching step “roughens” up the copper surface so that the adhesion of deposited metals is strong and complete. This is achieved by removing a small amount of copper from the surface via an oxidizer-acid combination such as peroxide and sulfuric acid. 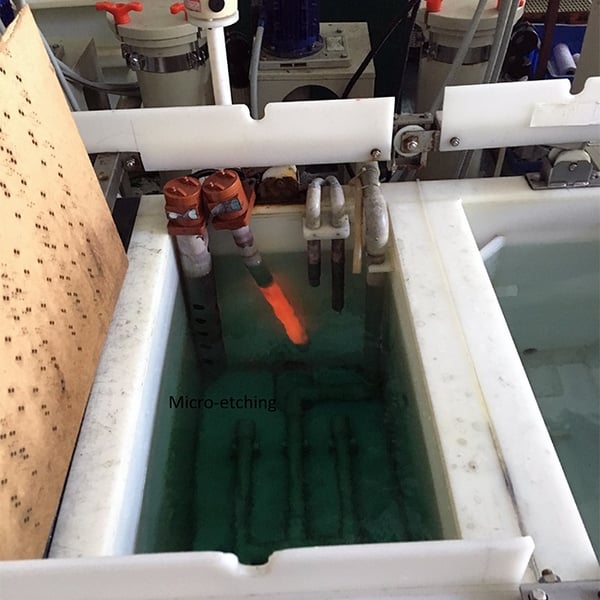 Printed Circuit Board During Micro-Etching Process

This step lightly coats each panel with a catalyst that attracts the nickel ions to bond with the copper. 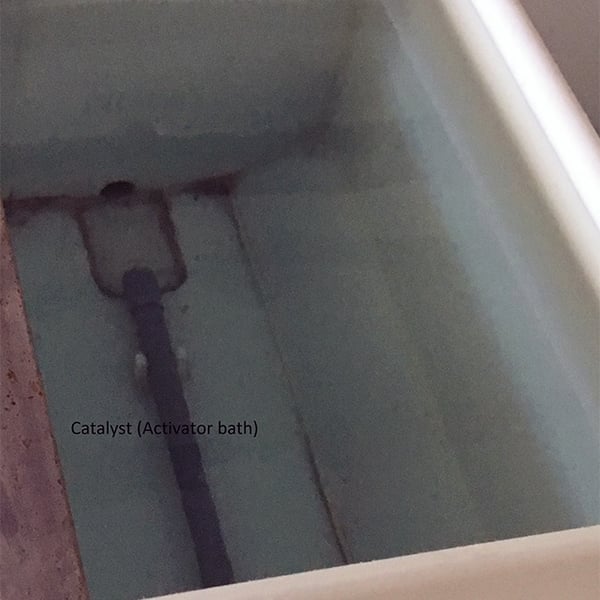 At this step, the required thickness of nickel is deposited on the part. The nickel bath is highly active and must be carefully monitored to maintain the balance and parameters of the nickel chemistries. As mentioned earlier, phosphorous control is extremely important. 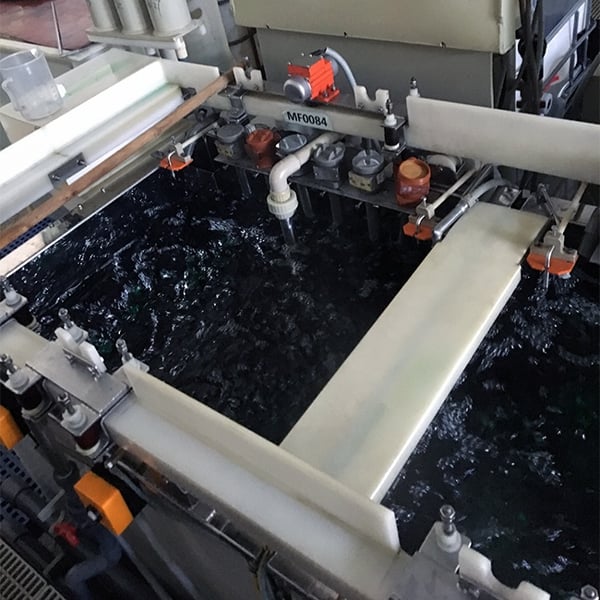 The palladium diffusion barrier is now deposited onto the nickel surface through an electroless process. The unique diffusion properties of the palladium layer are due to the presence of phosphorous in the deposit. The phosphorous content is produced by a reducing agent. There are multiple possible reducing agents but Epec uses sodium hypophosphite for superior results.

At this step in the process, a thin layer of gold is deposited onto the fresh layer of electroless palladium. With standard ENIG, this layer of gold average 2-3 micro-inches, which tends to be self-limiting to the ratio of nickel ions to gold ions. With the diffusing layer of palladium, thicker deposits of gold are attainable to specifically aid in the wire bonding process. The gold ions are kept in solution via arsenic, which is a toxic hazard solution.

If you are having challenges with your current ENIG surface finish or are looking for cost savings to wire bondable hard gold, then the superior results of ENEPIG should be considered. 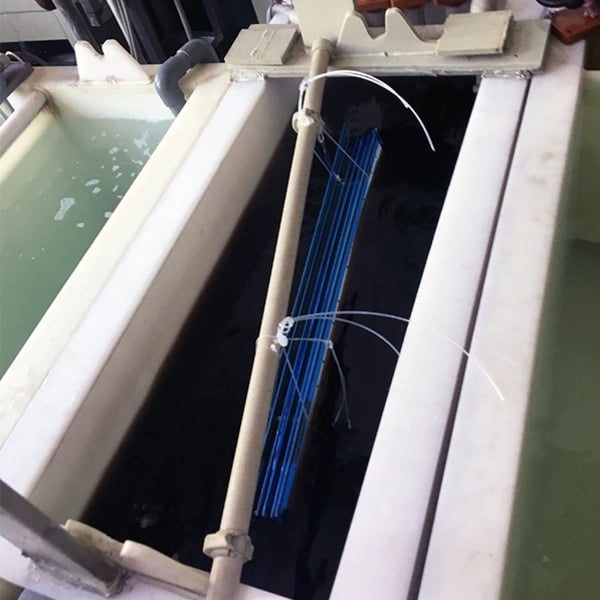 The final steps included multiple rinses, drying, and final inspection. Complete drying is a necessity as the presence of any moisture on the gold surface can lead to spotting and oxidation on the shipped product. Final inspection consists of visual cosmetic inspection and X-ray measurements to determine the thickness of the nickel, palladium, and gold.