Differential Paired Cables And When To Use Them

In the world of electronics, oftentimes how a signal is being transmitted from a sender to a receiver is just as important as what is being transmitted in the first place. Certain applications call for incredibly high levels of reliability and resistance to outside electrical interference, so more "traditional" or "common" cables just won't do.

In situations like the integration of an IC in a PCBA, it is common that a complete defense against electromagnetic interference is not possible due to the small size of the hardware you're talking about. To accomplish the same goal, many engineers turn instead to the transmission method which is where differential paired cables come into play.

Regardless of the application, differential signaling is a topic that is worth learning more about.

What is Differential Signaling?

Differential signaling is a term used to describe information that is transmitted electronically using two different, yet complimentary electrical signals. The same signal is essentially set as a different pair of signals, each using its own wire, typically in a twisted paired conductor. In other words, two totally complementary voltage signals are used to transmit a single piece of information when the paired signals are combined. One carries the signal, while the other carries the inverted signal.

This is a less common alternative to a technique called single-ended signaling, which is when an electrical signal is still carried by two conductors, voltage and ground.

With differential signaling, on the other hand, the sender and the receiver of the information in question aren't necessarily going to share a common ground reference. Likewise, if multiple signals are being transmitted at one time, each is going to need two conductors. It is also necessary (or at the very least, recommended) to include a ground connection through a shield or other ground wire.

With differential signaling, the receiver of the information essentially "extracts" it by detecting the difference between the inverted and non-inverted signals.

Why Should You Use Differential Signaling?

There are a few key benefits of differential signaling that are hard to achieve via other means. Perhaps the biggest of them is that there is no return current in this situation. Even though a ground connection is a good idea, it's less important than it would be in other techniques because there is little to no return current. In a lot of situations, the ground potential can also be different as the sender and receiver and can also move around within an acceptable range, of course.

Differential signaling by its nature is also very resistant to EMI (electromagnetic interference) susceptibility. Because the receiver responds to the difference in voltage between the two signals, the receiver circuitry will significantly mitigate the amplitude of any EMI or crosstalk that is present. This results in a higher quality, more stable, and more reliable transmission.

Along the same lines, differential signaling helps improve radiated emissions. While it's true that a certain level of EMI is to be expected due to the high frequency energy or data being transmitted, differential signals create electromagnetic fields that are both equal in magnitude, but opposite in polarity. This helps to all but guarantee that any EMI created by the two conductors will essentially cancel each other out.  Diminished radiated emissions can be expected, thus improving the effective shielding of the cable.

Finally, differential signaling offers the type of lower-voltage operation that just isn't possible with single-ended signals or cables. In a single-ended transmission, those signals need to maintain a high voltage to create the best possible SNR (signal to noise ratio) possible. This isn't the case with differential signaling and differential paired cable and, because of that, you can enjoy benefits like the fact that lower supply voltages can be used, smaller voltage transitions, reduced power consumption and the ability to transmit at far higher frequencies.

What Are Some of the Common Applications for Using Differential Signaling?

Because of the benefits in terms of signal reliability and the reduction of electromagnetic interference, it should come as no surprise that differential signaling (and associated differential paired cables) are used in a wide variety of different applications that require high speed data transfers of data and information.

They are commonly employed with serial ATA cables, for example, which are usually used to connect hard disk drives to your computer. When these interfaces are implemented with differential pairs, they're capable of a data rate of up to 1.5 Gbit/s in a lot of cases.

PCI Express cables are another common application where differential signaling is used, acting as a high-speed serial computer expansion bus standard. This has a data rate of up to 2.5 Gbit/s in most situations.

10 gigabit ethernet is another situation that benefits widely from differential signaling and is a technology used to transmit ethernet frames at a rate of 10 Gbit/s (hence the name). Note that in this example, most of these cables involve four differential pairs running at 2.5 Gbit/s each.

What Are the Most Common Wire Sizes, Colors and Lengths for Differential Paired Cables?

Most differential paired cables are either 22 or 24 AWG, each with their own individual twisted pair of jacketed copper conductors. As far as colors are concerned, this is often dictated less by the differential signaling itself and more by the application of the cable in question.  Typically, twisted pairs are noted on wiring diagrams with a solid jacket color on one, and the same solid jacket color jacket but with a white stripe on the other matching conductor. Combined, the two behave as a matched pair.

Ethernet cables, for example, are typically yellow or white in color. Serial ATA cables like those referenced above are typically black or yellow. USB cables are commonly white, and PCI Express cables are usually yellow or black. However, all of this can change to better reflect and/or support the current infrastructure you're working with.

The same is true for the lengths of these cables. Differential paired cables used in SCSI equipment, for example, allows for a maximum length of up to 25 meters if high-voltage differential signaling is employed. Single-ended SCSI offers a maximum cable length of between 1.5 to six meters, to give you an example of how large of a variation we're talking about.

How Are Differential Paired Cables Typically Identified in Wiring Diagrams?

In most wiring diagrams, differential paired cables are usually singled out with the presence of horizontal lines and a series of triangles. Each smaller triangle represents one of the two conductors, while the horizontal lines reference the two complementary signals that are being transmitted. The sender and the receiver are usually clearly identified within the context of the larger diagram. This again will depend on the actual application, like if differential pairs are used in something like a printed circuit board. 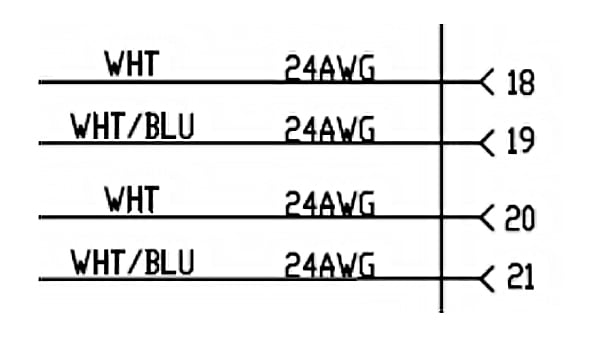