There's a lot of electrical, mechanical, and chemical considerations when it comes to developing a custom battery pack. In addition to deciding on the cell chemistry, a customer also must know how the battery pack may perform in various environmental conditions related to the application. They want to know the shelf life of the battery, the charge/discharge rates, and any possible hazards that could occur when the battery pack is in use.

Testing battery packs becomes an essential step in the development and production process. It allows the customer to understand how the battery will operate and allows for changes to be made before full production begins to address any issues.

Electrical and mechanical aspects may focus on the cell capacity of the battery pack by figuring out the discharge and charge rate. Another consideration involves how the batteries are configured in the pack, such as parallel or in a series, and how each cell will be connected internally in the pack. Other things to consider will be the temperature of the battery pack when in use created by the electrical connections as well as the battery chemistry, the current's electrical resistance, the state of charge (SoC), cell temperatures, and the state of health (SoH) among other factors.

For lithium-based batteries, a battery management system (BMS) must be included in the battery pack. This system manages the battery cells to ensure that they operate within defined parameters. If the cells experience some type of failure, malfunction, or overheating, the BMS system activates to cut off the current to the battery cells.

There are many different types of test fixtures used based on the battery pack, what tests will be performed, and other factors. Three common types of testers are manual, electronic, and automated. 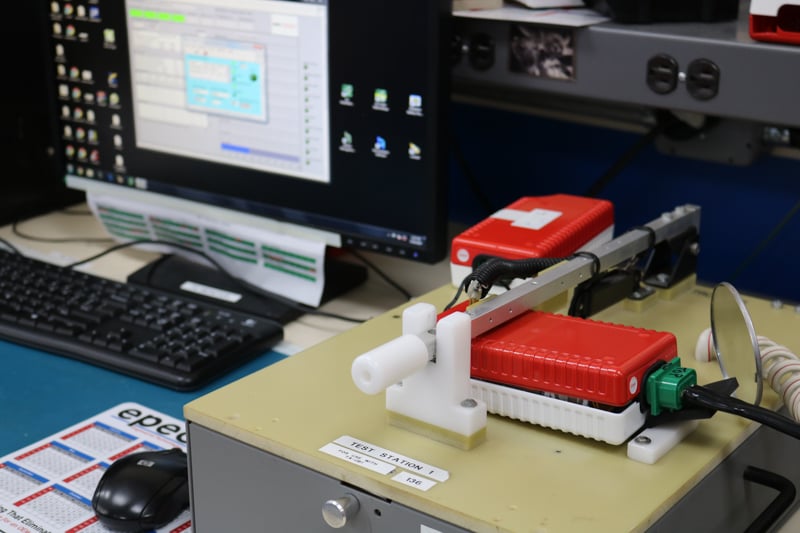 Manual Testers: Manual testers have been used for generations. While electronic and automated testers are typically found in labs, manual testers are still occasionally used today. Two test setups – physical resistor and a DC source – are used. The physical resistor is used to discharge the battery as the DC source charges the battery. This type of testing can be complicated and time-consuming as additional wiring and equipment (such as DMMS and relays) must be used to switch between the differing loads as well as take measurements.

Electronic Testers: Engineers often build customized electronic testers to more align the testing parameters to the needs of the application and to evaluate the battery pack parameters. Electronic testers have a setup of an electronic DC load and an electronic DC source all in one system. Measurement testing parameters are programmed into the load and source. Separate equipment is still a requirement for these testers, such as DMM, safety relays, DAQ, and transducers. While there are improved built-in measurements and automation, it can still be a complicated process that takes time.

Automated Testers: Automated testers take the parts of electronic testers and combine them with built-in measurement and automated tools. In a single setup is an electronic DC load and an electronic DC source. Then programmable capabilities are placed into the tester. Automated testers may be custom-built for the battery pack and application or be a commercial off-the-shelf product. If acquiring an off-the-shelf model, there may be some limited integrations and add-on features depending on the tester manufacturer.

Test fixtures are developed to test how the battery packs operate in a controlled, simulated process. This testing allows for further programming of electrical systems as well as calibration. Keep in mind that testing does not just happen once during the development and production stages but at separate intervals when testing the electrical circuitry before being attached to the cells and after the pack is almost assembled (final line testing).

Types of battery pack testing may involve the following:

Charge and discharge testing involves having a text fixture provide energy to place into the battery to evaluate the charge or to create a load to draw the energy in the battery pack out. Using this type of text fixture allows the engineer to check the capacity of the battery or how temperatures rise during the discharge at varying rates.

While testing circuitry is usually done once the printed circuit board is complete, the BMS software and hardware testing are performed when the pack is assembled. The battery pack is cycled while the engineer evaluates how the BMS software and hardware works with the cells. Measurements are taken for a range of aspects that include temperature, current, voltage, SoC, and energy. This testing ensures that the BMS is working as intended for safety procedures and to calculate the battery pack's capacity.

When obtaining custom production test fixtures, the timeline for the test fixture will be unique to each customer based on the size of the battery pack, the complexity of the electronics and BMS, and the type of measurements that will be performed on the pack.

Tester development should start once obtaining the required documentation regarding the battery packs, cell capacity, and power needs of the application. Since these testers are used through different phases of the pack's lifecycle, it should be assembled and ready when the battery pack moves through each production phase. Then the measurements can begin during R&D, production, and possible depot repair.

The number of desired and necessary tests will also shape and change the timeline. If a problem is encountered during testing, the battery packs will undergo secondary testing procedures to ensure that the necessary modifications are successful or if additional changes must be made.

Customers should look at battery testers as a necessary procedure that offers long-term cost savings. While it requires large initial investments in equipment and added costs with gaining and analyzing measurement data, a battery pack tester ensures that higher quality packs are leaving the production line that will work in the intended application with minimal risk of failure. Working with the manufacturer may help customers to further understand the development and production of these testers as well as the timeline for testing that will factor into the production schedule.