All of these factors may have detrimental effects on the battery pack. Corrosion, chemicals, water, and fluctuating temperatures may cause minor to significant damage or malfunctions to the battery pack. Vibrations or shocks may loosen or damage electrical connections for the pack. In addition, these issues could shorten the battery life.

Customers looking for a custom battery pack design may select battery potting during the manufacturing process. Battery potting involves fully or partially placing a compound around the batteries that are set in the mold.

Potting involves using a mold that holds the batteries in place for the application of the potting compounds. All electrical connections and the battery management system (BMS) are put into place, tested, and verified before the potting process, as they may not be changed if the battery pack undergoes full potting encapsulation. 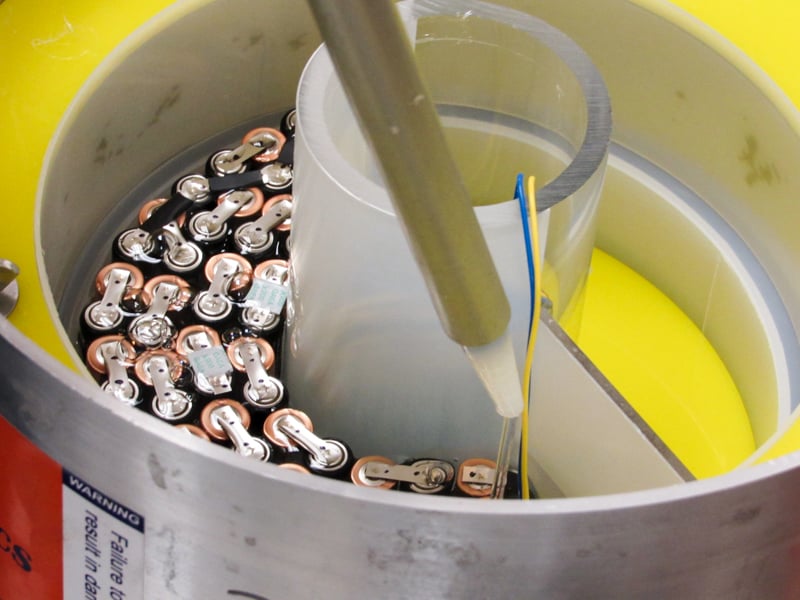 The potting compounds derive from acrylic, epoxy resin, polyurethane, and silicone. The type of compound used for the battery pack potting is dependent on knowing the operating conditions of the application as well as the physical properties of the materials, environmental conditions, and the processing requirements.

Watch this short video to learn more about what is involved in the potting process of a custom battery pack.

Battery potting applications will vary based on the device and industry. Batteries experiencing marine conditions with excessive moisture and saltwater exposure on docks and boats would undergo battery potting.

Control panels and devices experiencing extreme and rapidly fluctuating temperatures, such as in airplanes and military aircraft applications, may find benefits with the battery potting as the battery pack would be more protected and undergo fewer temperature fluctuations.

Any devices that may experience shock and vibrations, from dropped cell phones, batteries in electric vehicles, wheelchair batteries, video camera battery packs, laptop computers, and portable devices may become potted to absorb the vibrations and shocks.

Both lithium-based batteries and alkaline batteries may undergo potting. These battery chemistries experience little off-gassing that would build up within the battery if they become encased with potting compound.

Nickle-based batteries, such as nickel-cadmium (NiCAD) do require vents to allow the gases to be released. They may be potted yet should not undergo total potting that would cover over the vents. Larger lithium-ion batteries, such as ones used in hybrid vehicles, would also require venting designs. Potting may be used for primary and secondary batteries.

In addition, other electronics such as the BMS also may undergo the potting process. The compounds extend their protective capabilities over to the BMS system while the system continues to perform its functions by monitoring the state of health (SoH), state of charge (SoC), battery temperature, and other features of the battery pack.

Potting compounds come in different colors as well as clear resins. The customer may select certain colors based on the battery pack's specifications and specific devices it may be used in. These compounds are not always hard. Due to the battery pack experiencing expansion and contraction, the compounds also need to allow for expansion and contraction as they will range from a medium-hard to medium-soft texture.

The potting compound may become damaged if used strictly as the enclosure for the battery pack. Also, it may have too soft of a composition to protect the battery pack during use for applications that may experience shocks and vibrations. Potting boxes are used to hold the compound and work as an enclosure. These potting boxes may come in varying materials, such as ABS plastic or even diecast aluminum. With the potting box, the potted battery can handle transportation and handling.

Benefits of Potting a Battery Pack

Potting batteries provides a range of benefits for the battery pack and the application. The compounds provide a type of hermetic seal preventing anything from penetrating. It wards off chemicals, moisture, and temperatures. Depending on the type of compound it is, the materials may also draw away and disperse the heat created from the battery pack, allowing for the cells to remain within normal temperature operating ranges.

In addition to keeping moisture, chemicals, and extreme temperatures from the batteries, the potting compounds may also provide different cured properties. They may offer enhanced dielectric strength and electrical insulation for the battery pack. They keep attached electronics in place even when the battery pack becomes dropped or experiences other shocks and vibrations.

Potting shells are also lower in cost. Since the potting compounds will partially or fully fill the potting box, it provides additional strength and protection. So, the potting shell or box does not need to have an extra thickness added.

Battery potting is available for battery cells of different sizes and configurations. With potting, customers gain peace of mind that their battery packs are further protected from environmental conditions, operating conditions, and other adverse factors.

Customers should keep in mind that battery potting is not a standard requirement for all battery packs. It is an available option when the battery pack will experience certain conditions that require extra protection within the device. The potting timeline will depend on the type of compound that is selected along with its curing requirements. The timeline also depends on the availability of the compound for prototyping and battery pack manufacturing.

By going over the battery chemistry and characteristics, the customer may have a clearer understanding of what potting compounds offer the desired properties at an acceptable price for the budget. Then the manufacturer can create the tooling and samples for the customer to evaluate within the device itself. The customer may make any changes to the specifications for the prototypes until an agreement is reached for the battery chemistry, potting materials, and any additional electronics required. Then the manufacturing process can proceed for the battery packs.