Battery Cell Thermal Runaway: What Does it Mean and How to Avoid It

When machines operate, they generate internal heat that may compromise working components. The same situation holds true for battery cells. Cells undergo a chemical process that provides power to devices.

This chemical process also generates heat during charging, discharging, or when experiencing a short circuit. If the battery's temperature reaches a certain point, the cell will undergo thermal runaway.

What is Thermal Runaway?

As the temperatures rapidly rise, the unstable chemicals respond by generating more heat. Temperatures may reach up to 752° Fahrenheit. The cells become so hot that the chemicals turn into a gaseous form. At this point, the gases may have no way to vent from the cell, causing the battery to become damaged, explode, melt, or catch fire.

Factors that may cause thermal runaway may vary based on the cell chemistry. However, the most common causes for all cells involve rapid charging/discharging cycles that cause excessive currents, short circuits, overcharging the cell beyond the maximum voltage, and mishandling that may cause cell damage.

Short circuits for cells, such as lithium-ion, typically occur when there is deformation to the cell. The short may happen internally or externally due to some type of physical damage, such as a power tool that falls from a scaffold to the hard pavement.

Once thermal runaway starts, it is extremely difficult and dangerous to stop. Most procedures recommended involve staying back at a safe distance and preventing any potential fires from spreading.

Most people know that thermal runaway may impact lithium-based batteries. However, all cell chemistries may undergo this situation, including lead-acid batteries. 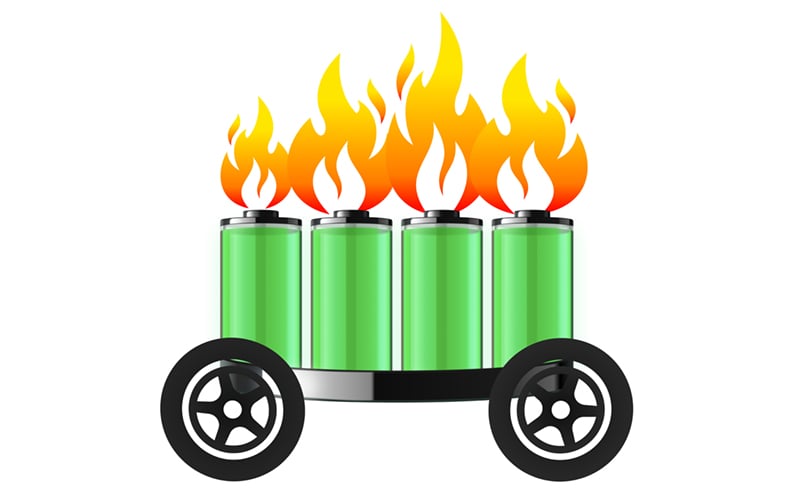 A battery cell's temperature, if it reaches a certain point, will undergo thermal runaway.

There are several methods to use to prevent thermal runaway from occurring. These methods start from the design stages and continue all the way to when a consumer is using the product. When it comes to the design of the battery pack, the cell arrangement, having a battery management system (BMS), and venting may provide additional protection.

The number of cells needed for the battery pack and the arrangement of the cells plays a vital factor in preventing thermal runaway. The most important thing to remember is that a battery pack should continuously aim to reduce the amount of built-up heat along the cells. If there are many cells, such as 24 cells, and they are all clustered together, then it creates a heat sink that does not dissipate.

Arranging cells in a row when possible, allows the temperature to be more evenly distributed. There are no heat sinks created, so the temperatures move away from every cell. If the cells are made into even rows and columns, the created heat sinks are able to make higher temperatures.

For some battery cells, such as lithium-ion used for electric vehicles, a manufacturer may design thermal conducting plates to help dissipate the heat. The plates draw in the heat and then transfer it away from the cells.

Thermal conducting film may lay along the cells. This conducting film helps to reduce heat along hot spots. The film also acts as thermal insulation in the event that thermal runaway does happen to one of the cells. When the sell undergoes this process, the heat cannot spread to the other cells and becomes contained.

Another design consideration involves monitoring the battery cell for any overcharging or over-discharging that may occur. The BMS manages and monitors a wide range of cell functions, including voltage, current, charge control, charge balancing, and cell temperature. The BMS also serves as a safety switch if there is an internal short circuit issue.

A manufacturer designs the BMS to monitor all the cells in the battery pack regarding its state of health (SoH) and state of charge (SoC). If temperatures begin to rise, the BMS can turn on cooling options. It can also balance the cell environment. If thermal runaway begins to occur and the cooling options cannot control the rapidly rising temperatures, the BMS can shut down other cells to prevent them from also undergoing thermal runaway.

BMS are designed as safety features to minimize the possibility and risks of thermal runaway. It is designed into lithium-based battery cell packs, keep in mind that circumstances may occur when thermal runaway still happens even with the BMS in place. The system does not completely prevent the chain reaction from occurring, yet it can minimize the occurrences and provide safety functions to lessen the likelihood of the other cell from undergoing thermal runaway.

Due to the battery cell being within an enclosure, another way to help with heat transfer is to use vents. Vents allow the heat to leave the enclosure while drawing in the cooler air outside. The vents can also provide ventilation to the electronics alongside the battery cell and application to draw out heat. Many types of battery chemistries are vented. Lead-acid batteries need ventilation due to the creation of hydrogen gas during the charging process.

When it comes to lithium-based cells, they do not generate any gases. Often customers do not believe the cells need to be vented, however, ventilation can help to lower the risks of thermal runaway by lowering the temperatures along the cells as the heat can escape the enclosure.

Thermal runaway is a serious issue that occurs to all types of battery cell chemistries. At Epec, we take into account these issues during the design phase allows customers and manufacturers to consider the safety factors to use to prevent thermal runaway from occurring. With careful monitoring of the battery chemistry and arranging the cells in the best manner to minimize hot spots, a customer can ensure that batteries will be safe to use in applications.