Why DOT/UN 38.3 is Required for Lithium Batteries

Applications with high-power needs and complex systems may use lithium batteries to operate. Lithium batteries can pack a high-energy density into smaller pack sizes, making them lightweight and small enough to be used in common everyday products such as cell phones, laptops, tablets, and hoverboards. However, the battery's chemistry can create safety hazards when not being constantly monitored.

Unlike other types of batteries, lithium and lithium-ion battery packs must undergo testing to ensure that the batteries do not create hazards to the general public. 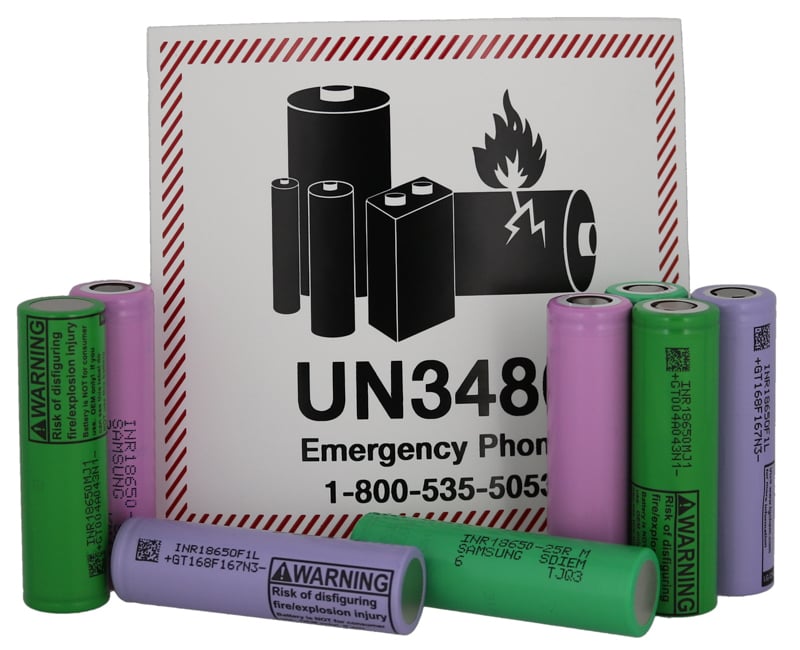 Why Lithium Batteries Are Tested

Lithium batteries contain the metal lithium in their chemistry. This metal offers extremely high-energy density and a low discharge rate, which is desired by consumers for their electronic devices.

Unfortunately, this metal is very unstable and reactive. During charging, the lithium battery chemistry would experience thermal runaway when the temperatures would rise too rapidly and go beyond the battery's melting point. The situation could cause the lithium battery to vent hot gases that were dangerous or build up these gases to the point where the battery pack would explode or burst into flames.

During development, manufacturers and researchers switched to lithium-ion metals that were non-metallic. This chemistry contained a lower density than lithium batteries, yet the energy density was still two times greater than nickel-based batteries and four times greater than regular lead acid batteries. The lithium-ion battery could still offer a suitable high density, a low self-discharge rate, and there was no need for prolonged battery priming.

To ensure that lithium batteries would not experience thermal runaway without a failsafe available, all lithium batteries must have a battery management system (BMS) installed into the pack. The BMS will have an electronic protection circuit, and other various safety mechanisms in the cell, to monitor the battery during charging and discharging processes. If a high current surge becomes detected that could raise the battery's cell pressures over safe limits, the protection circuit will perform various tasks such as safely vent the gas at a controlled rate. It will also cut the current flow if the temperature goes over the stated thresholds or cut off the current if the battery is over-discharging, so the voltage does not go below the recommended 2.5V per cell.

Lithium batteries are considered hazardous and dangerous goods, as they fall under the United Nations Class 9 Dangerous Goods classification. Due to this classification, testing is performed to ensure that the design and manufacturing of both the lithium battery as well as its protection circuits meet safety requirements. The tests will also check for any venting, leakage, flames, or other dangerous circumstances. This testing is performed for all types of lithium-based batteries but is not required for other batteries that do not contain the lithium metal.

The DOT/UN 38.3 testing is performed for all lithium batteries that are being transported. This testing standard falls under the United Nations (UN) Manual of Tests as well as the United States Department of Transportation (DOT) regulations. Not only is the DOT/UN 38.3 a requirement in the United States, but it has also been adopted as an international standard since the transport of lithium batteries may cross international waters and boundaries.

Lithium batteries will be tested based on mechanical and electrical requirements. These tests are performed at all points within the transportation process, whether the battery is moving between suppliers to manufacturers, manufacturers to retailers, or retailers to distributors. It is also applied during product returns.

The tests are performed for lithium batteries by themselves when out of the products and when installed into the products. These requirements also apply to lithium batteries used in the field, when they are shipped outside of their original packaging, and for every type of transportation process: air, rail, roadway, or by sea.

The DOT/UN 38.3 consists of 8 tests for lithium batteries. The test requirements are:

All the above tests, except for the T7-Overcharge Test, are performed on primary and secondary batteries. The T7 test is only performed on secondary and rechargeable batteries. The T8-Forced Discharge Test is only performed on primary and secondary batteries. Accredited organizations and testing laboratories can perform these tests and provide certification. Organizations can become ISO17025 accredited to ensure that their testing processes comply to all national and international standards. Battery test certification must be renewed for certain circumstances, such as the battery design or product design becomes changed before the final shipping process.

A new UN requirement will be placed into effect in January 2022 that will impact battery testing. All manufacturers and distributors will be required to make available lithium battery test summaries. This new requirement will fall under the UN Manual of Tests and Criteria, Part III, Subsection 38.3, Paragraph 38.3.5. The test summary can be made available on the manufacturer's or distributor's website or as a product information sheet.

There are limits stated under the DOT/UN 38.3 requirements regarding the number of lithium batteries that can be shipped on aircraft at one time by a manufacturer, distributor, or retailer. The restrictions will either be based on the amount of lithium that is contained within the battery for lithium batteries, or the watt hour rating for lithium-ion batteries. The following information only applies to net quantity batteries that are not combined in the same package.

Lithium batteries and lithium-ion batteries go through extensive testing to ensure that they are safe to use for the specified product and application. Due to testing requirements, a certain number of packs (16) will typically need to be sent off for testing. The testing can take up to 4-6 weeks and create an estimated cost of about $5,000-$7,000.

Customers need to take these factors into consideration when developing a custom battery pack, development costs and timetables expectations for their product's time to market.

Today at Epec, the customer comes first, and everything we do must be put through that filter. Whether it is developing e-commerce platforms to make it easier to work with us, or creating a NPI (new product introduction) process that helps our customers get to market faster, or the other 10 new projects we have in process, we must focus on building the new. By doing that every day, and by always making the customer our top priority, we plan on being here for another 65 years and then some.

Learn more about our 65 year story →