When using power sources to run embedded components, it's not always simple to pop in a fresh set of batteries. Newer technologies, from smartphones to electric vehicles to portable power tools, require batteries that can hold a significant amount of energy, be lightweight enough to carry or move, and be safe for the user. Lithium batteries offer all these benefits for portable electronics, vehicles, medical equipment, and even grid energy storage.

Lithium-ion and Lithium iron phosphate are two types of batteries used in today's portable electronics. While they both share some similarities, there are major differences in high-energy density, long life cycles, and safety. Most people are familiar with lithium-ion as they most likely own a smartphone, tablet, or PC. Lithium iron phosphate is a newer type of battery gaining recognition in the manufacturing industries due to its cost-effective materials and stability with high temperatures.

Charge and discharge rates of a battery are governed by C-rates. The capacity of a battery is commonly rated at 1C, meaning that a fully charged battery rated at 1Ah should provide 1A for one hour. The same battery discharging at 0.5C should provide 500mA for two hours, and at 2C it delivers 2A for 30 minutes.

Lithium-ion can consist of two different chemistries for the cathode, lithium manganese oxide or lithium cobalt dioxide, as both have a graphite anode. It has a specific energy of 150/200 watt-hours per kilogram and a nominal voltage of 3.6V. Its charge rate is from 0.7C up to 1.0C as higher charges can significantly damage the battery. Lithium-ion has a discharge rate of 1C. 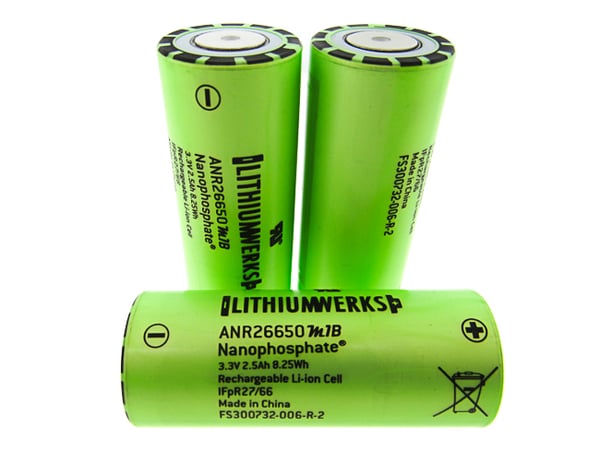 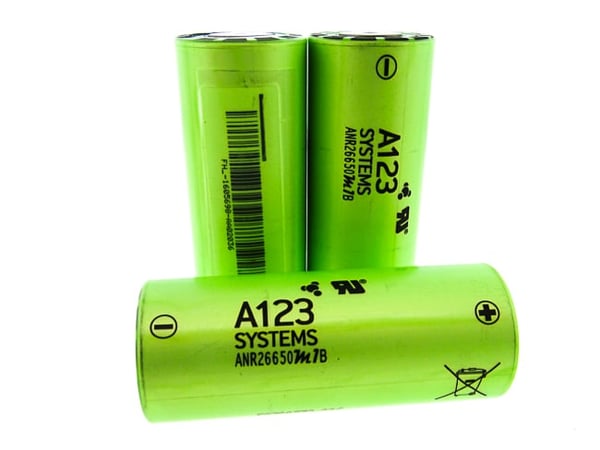 
What are the Energy Level Differences?

Lithium iron phosphate has a lifecycle of 1,000-10,000 cycles. These batteries can handle high temperatures with minimal degradation. They have a long life for applications that have embedded systems or need to run for long lengths of time before needing to be charged.

When it comes to storing unused batteries, it is important to pick a chemistry that doesn't lose its charge over long periods of time. Instead, the battery should give close to the same charge performance as when it is used for over a year. Both lithium iron phosphate and lithium ion have good long-term storage benefits. Lithium iron phosphate can be stored longer as it has a 350-day shelf life. For lithium-ion, the shelf life is roughly around 300 days.

Manufacturers across industries turn to lithium iron phosphate for applications where safety is a factor. Lithium iron phosphate has excellent thermal and chemical stability. This battery stays cool in higher temperatures. It is also incombustible when it is mishandled during rapid charges and discharges or when there are short circuit issues. Lithium iron phosphate does not normally experience thermal runaway, as the phosphate cathode will not burn or explode during overcharging or overheating as the battery remains cool.

However, the chemistry of lithium-ion does not have the same safety advantages as lithium iron phosphate. Its high energy density has the disadvantage of causing the battery to be unstable. It heats up faster during charging as a lithium-ion battery can experience thermal runaway.

Another safety advantage of lithium iron phosphate involves the disposal of the battery after use or failure. A lithium-ion battery made with a lithium cobalt dioxide chemistry is considered a hazardous material as it can cause allergic reactions to the eyes and skin when exposed. It can also cause severe medical issues when swallowed. So, special disposal considerations must be made for lithium-ion. On the other hand, lithium iron phosphate is nontoxic and can be disposed of more easily by manufacturers.

Lithium iron phosphate is sought after for any electronics or machines where safety and longevity are desired but doesn't need an extremely high energy density. Electric motors for vehicles, medical devices, and military applications where the technology will experience higher environmental temperatures. Lithium iron phosphate is also ideal for applications that are more stationary as the battery is slightly heavier as well as bulkier than lithium-ion, although it can be used in some portable technologies.

Lithium iron phosphate may not be selected for applications where portability is a major factor due to its extra weight. For smartphones, laptops, and tablet devices, lithium-ion batteries are used. Any high-energy device that needs the best performance on the first day can benefit from the chemistry found on lithium-ion batteries.

Besides looking for the right energy sources based on portability, safety and energy density, manufacturers also must consider the costs during the production of electronics as well as during disposal. Many manufacturers will select lithium iron phosphate as the cheaper battery alternative. The batteries cost less due to the safer iron phosphate chemistry as manufacturers don't have to spend more money to recycle the materials.

Lithium Offering a Range of Benefits

Advances in battery technologies has placed lithium chemistry at the head of the pack for being the best power source for high energy use devices that are portable. It's long shelf life and the benefit in providing a continuous source of power over long periods of time is why both lithium-ion and lithium iron phosphate are reliable alternatives.

Currently, lithium batteries are still on the pricey side when compared to nickel metal hydride and nickel cadmium batteries. Yet, the long life of lithium batteries can equal out the initial high costs. For manufacturers trying to decide whether lithium-ion or lithium iron phosphate will be ideal for applications, consider these key factors:

Also, take the operating environment into serious consideration as well as any vibration issues that may be experienced. These instances may influence a manufacturer's choices as the chemistry stability that lithium iron phosphate offers are superior than that of lithium-ion.