Flexible Heaters: The Pros and Cons of Temperature Sensors

Flexible heaters are used in numerous industries to provide heat in a selective area to deal with; condensation and mist, food processes, keeping electronics warm due to environmental temperature changes or keeping liquids in a fluid state. Temperature sensors are used to monitor the temperature of the flexible heater as well as the surface that is being heated. 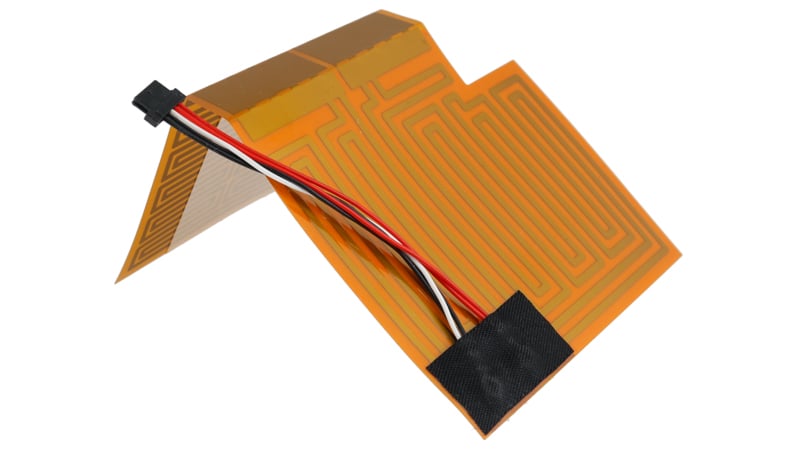 Thermocouple sensors consist of two wires made from metals that are dissimilar to each other. Both wires are welded together to form a junction. One end of the wires is a reference junction that is typically a part of the input instrument. The thermocouple works by producing a voltage between the two wires, referred to as thermoelectric potential (electromagnetic field or EMF).

There are major advantages to using thermocouples with flexible heaters. The first is the wide temperature range measurements, which allow these sensors to be used in a large variety of applications. Another advantage is that a thermocouple is a simple sensor design that is rugged. It handles shocks and vibrations well. Thermocouples also come in smaller sizes for tight fits along with areas where the flexible heater needs to bend around other components.

A thermocouple's response time is the fastest compared to other sensors when there is a sudden change in the temperature. They are also self-powered and low in cost. Thermocouples are ideal when used as point sensing.

Some disadvantages to thermocouples are that they are the least accurate in sensors unless they are specially calibrated, and they are susceptible to electrical noise. Thermocouples must also have cold junction compensation, since the cold end of the instrument does not stay at 32°F. The cold junction compensation is there to compensate for the missing voltage. Another disadvantage is that the sensor is prone to accuracy drift during its lifespan.

Thermistors are made with metal oxides that are formed into beads. These beads are encapsulated within epoxy or glass. These sensors are considered resistive devices as the metal beads experience resistance changes to the temperatures that they are measuring. When the temperature increases, the thermistor's resistance decreases quickly and in a non-linear fashion.

Thermistors will show a negative temperature coefficient that is large. They sense temperature ranges from -100°F to 500°F. They are usually made from sintered metals. These temperature sensors are ideal for point sensing and for applications that require lower temperatures. The sensor requires a constant voltage or current to operate.

Thermistors are more accurate than thermocouples and avoid most of the problems associated with lead wire resistance. Accuracy drift is lower for thermistors during the sensors' lifespan, and they do not require cold junction compensation. They are rarely susceptible to electrical noise from other machines and offer a fast response to temperature changes. The size of a thermistor can go as small as a pinhead, allowing it to be used for very small flexible heaters.

The increase in the element’s resistance happens in a repeatable manner. These sensors handle temperature ranges of -200°F to about 1475°F. An RTD has a curve across the temperature span, which is not found with thermocouples or thermistors. These sensors require constant voltage or current to operate.

The temperature range for the RTDs is better than a thermistor sensor and is rarely susceptible to electrical noise. They produce highly accurate temperature measurements and experience less accuracy drift than a thermocouple. The thin-film RTDs have a very fast response to temperature changes as standard temperature controls are available for the sensor output. They do not require cold junction compensation.

RTDs may cost more than both thermocouples and thermistors based on their design. These sensors are somewhat susceptible to shocks and vibrations.